Accessibility links
In Fair Glendale, the Bard's Super Bowl Play The ghost of William Shakespeare makes a rare appearance in Arizona, where the Giants of York and the Patriots of Old — er, New — England prepare for a mighty battle. Frank Deford and a cast of NPR reporters and hosts cover Super Bowl media day in verse. 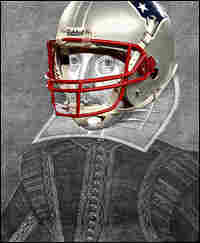 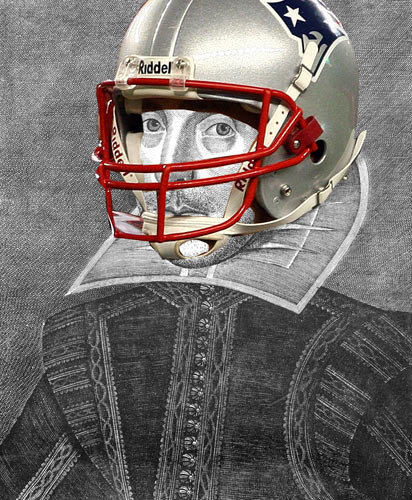 It's Wednesday, the time we usually hear from commentator Frank Deford. This week, though, the ghost of William Shakespeare makes an appearance. The bard was in Glendale, Ariz., the other day as the Super Bowl contenders met the media ... and filed this exclusive play.

Our drama begins as a slovenly mob of sports journalists enters the field at the University of Phoenix Stadium. A fetching reporter, the Sideline Wench of the Duchy of Fox, steps forward.

Sideline Wench: Since none of my sex 'tis allowed
Within the network booth on high,
'Twill be my one sweet distaff voice
Midst these growling sports-page lowlifes
Which will, upon my sideline nunnery,
Dare confront the pretty Brady.

Kornheisercranz: Upon this line-ed greensward set within
A desert the Almighty fixed but for cactus
Will be this, our strange stage for Sabbath's pigskin war,
Waged by mesomorphs come from green Blue States afar.

Wilbonstern: 'Tis stranger still the warrior names affixed,
For they would better be the one, the other.
Think on it: those called Giants are but dwarfs here,
Mere ciphers in the point spread, a goodly dozen down.

Kornheisercranz: Yea, the true giants, these peerless monsters,
Call themselves Patriots, e'en though they give shame
To that sweet address, trafficking more as traitors,
Scoundrels in video deceit, cashing all manner of Belichicks.

Sideline Wench: But, hush all you scribes who bloviate so,
For comes now fair Brady, he who is as super
In his mortal company as e're this game is to sport.
But soft! Let me look upon him as if I filled his embrace.
Oh! A visage that Narcissus would have traded for!
And a manner that knows neither pressure nor fear.
But, alas, 'tis women of fashion that he favors,
For one already has his babe, another his flowers,
And I, only a sideline wench who can but model dreams.

And now Brady enters amid a crowd of admirers. Small children toss rose petals in his path.

Kornheisercranz: Methinks the crunch upon his presence is so great,
And the paparazzi do shine forth such a spangled glare
That the great golden orb above must be dimmed
And the sounds of Niagara itself seem noiseless
Before the din of questions that confront our great Brady.

The Media: Brady, Brady what is afoot with thou?

Brady: Good men of the press box, I come whole to you,
For always the feats I have achieved, were upon my two feet.
And Sunday, I shall play the same no less,
One game at a time, one good foot before the other.
But now, I bid you, let me take my leave to join my mates,
For by rolling alone, there is no way for Moss to gather passes.

Narrator (in hushed tones): And so Brady exits stage left ... and the heralds return.

Wilbonstern:: But look now, who approaches from yon other way?
'Tis young Eli, who seems, in his manner, yet a boy,
No match for such a paragon as the dauntless Brady.

Kornheisercranz: 'Tis so, he is yet more Manning than man,
But the football blood that fills that callow vessel
Is as royal as Brady ever bought to his captured throne.
Eli is the seed of the sainted Archie
And thus branch from the same tree as Peyton,
He, who made stallions of Colts but twelvemonth past.
Mayhap the lad can, with a pigskin, find the same mark
Little David did when bookies of yore favored huge Goliath.

Sideline Wench: So, withal, is the grandeur of Brady match for the legacy of Eli?
Forsooth,
With that I take to silence and send it back up to the big boys in the booth.

And so the curtain falls on our Super Bowl drama ... with apologies to Shakespeare and thanks to our weekly sports bard, commentator Frank Deford, who played the part of Kornheisercranz. Thanks also to Sylvia Poggioli, who played the Sideline Wench, Neal Conan as Wilbonstern, Ari Shapiro as Brady and Steve Inskeep as the Narrator.