Accessibility links
Andy Palacio's Garifuna Music Lives On Palacio, who died Jan. 19, was known as much for his music as for his impact on Belize and the promotion of its rich traditions and cultures. With Watina, he stripped down his music to connect more with the true sound of his home country. Hear an interview and performance. 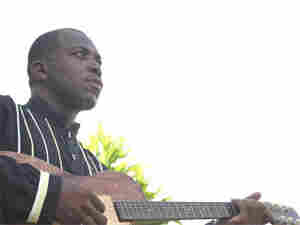 Andy Palacio was known as much for his music as for his impact on Belize and the promotion of its rich traditions and cultures. For his latest album, Palacio abandoned mainstream Latin-American instruments and simplified his music to connect more with the true sound of his home country. The result, Watina, was hailed as one of the top albums of 2007. Unfortunately, it would be the last album by the Latin American legend, who died Jan. 19 at the age of 47.

KUT 90.5 was glad to host Palacio in April of last year in an interview and performance with Jay Trachtenberg. Along with friend and fellow musician Aurelio Martinez, Palacio performed tracks from Watina. His music was a mix of African and Central-American sounds — dubbed "punta rock" by many — and the instruments and rhythms a direct product of his Garifuna past. Palacio's socially conscious lyrics focus on serious themes, many of which Americans have no idea exist just south of us. He was a champion of community activism and global diplomacy: He was even chosen to serve as the official Culture Ambassador for Belize, and served as the head of the country's National Institute of Culture and History.

When Palacio was 20 years old and traveling through Nicaragua, he met an elderly man of his same ancestry who opened Palacio's eyes to a past that was slowly fading away. The Garifuna culture and traditions were disappearing with the eldest of the country, and the assimilation to the modern world drove the Garifuna to abandon the traditions that Palacio had just discovered.

Inspired by his trip, Palacio decided to drop the electronic sound that was slowly dominating mainstream Central-American music and devote his sound to the traditional Garifuna music of acoustic guitars accompanied by intelligent, traditional lyrics. It was this sense of loyalty and devotion to his home country of Belize that would propel his legacy to that of more than a mere musician. In a matter of years, Palacio's music and positive outlook made him not just a cultural icon, but also a diplomat for a fading culture that he knew was worth preserving. He proved this with Watina. And the world was just starting to join him.

Listen to the previous Favorite Session or see the full archive.