Accessibility links
Sports Fans' Stress Can Be Heart Hazard A new study shows that heart attacks and other cardiac events went up in Germany during the 2006 World Cup soccer championships. Doctors say the stress fans experience can be risky, especially if they have pre-existing heart problems. 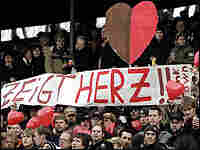 A new study of German soccer fans shows that heart attacks and other cardiovascular events went up during the 2006 World Cup. Malte Christians/Getty Images hide caption

As football fans are gearing up for Super Bowl Sunday, The New England Journal of Medicine is playing spoilsport with a new study on the hazards of being a fan.

The study, conducted in Germany, found that soccer fans had an increased risk of heart attack during championship games.

Researchers did the study because earlier studies had mixed results. The 2006 World Cup soccer games in Germany gave cardiologist Gerhard Steinbeck and his colleagues at Maximilian University in Munich a perfect opportunity to test the theory.

"These were really extraordinary events in Germany," Steinbeck says. "The national team [was] playing, putting the whole nation in stress."

Sports fans of all stripes are familiar with that kind of stress. In Saugus, Mass., just outside Boston, we talked to fans at a youth hockey match.

"How emotional do people get?" asks Jim Madison, who coaches a team in nearby Andover. "Very emotional! It's like the Stanley Cup every game.

"In a close game, it's exciting," he continues, "it's just part of the game. It always happens, it seems like, in this game because of the contact and the physical play and the referees calling things.

"You lose a shootout and it's heartbreaking. You play a good game and it all comes down to that," Madison says. "The heartbeats go right up."

The German researchers decided to find out whether that cardiac acceleration has a downside. During the World Cup games, they monitored the emergency rooms of Munich-area hospitals for heart attacks, chest pain and major heart-rhythm disturbances. They compared heart emergencies on days when Germany played and on days when the team didn't. Then they compared the findings with similar periods in other years.

The results were striking, Steinbeck says, citing one game in particular.

Within two hours of the start of a game where Germany beat Argentina, heart attacks and other cardiac problems were way up. Even though Germany won, the game was very close — there was a penalty shootout.

"The Germans were very lucky to win this game," Steinbeck says. "So we were all just were happy. [But] apparently you have to pay for that." Payment in the form of a three-to-four-fold increase in the number of cardiovascular events.

"And of course this was a very bad experience," Steinbeck continues. "Nevertheless, the increase in the cardiovascular events was exactly as high as when Germany beat Argentina.

"So it's not winning or losing. It's just the stress produced by both these games," he says. On days when Germany played, cardiac emergencies were nearly three times higher.

In the study that appears in the Journal, Steinbeck and his colleagues acknowledge that other factors may amplify that stress.

"Lack of sleep, overeating, consumption of junk food, heavy alcohol ingestion, smoking and failure to comply with the medical regimen should all be considered," they write.

For whatever reason, men appeared to be more vulnerable. So were men and women with known heart trouble. Nearly one-half of the cardiac emergencies were among people with prior heart disease.

Dr. Robert Kloner, a heart specialist at Good Samaritan Hospital in Los Angeles, demonstrated a similar spike in cardiac problems in the wake of the nearby Northridge earthquake in 1994.

You'd think being in a major earthquake would be a different order of stress than watching a Big Game. Not necessarily, says Kloner.

"The fans are emotionally connected to the team," Kloner says. "What happens is there's a sympathetic surge that occurs in the fans."

"Sympathetic" not only in the usual sense, but also because the sympathetic nervous system, which controls the body's reaction to stress, leaps into action.

"So heart rate goes up, blood pressure goes up," Kloner says. "This increases the oxygen demand on the heart."

Another doctor with firsthand experience at the 2006 World Cup games is Peter Libby, chief of cardiovascular medicine at Brigham and Women's Hospital in Boston.

"Having witnessed the crowd's responses in World Cup playoffs, I'm not at all surprised by the results [of the new study]," Libby says. "That's the fighting spirit, much like we in Boston will have during the Super Bowl."

So what about the Super Bowl? Is it hazardous to some fans' health? Clearly lots of excitable sports fans do not have heart attacks.

There's not much research on rabid football fans, but Kloner did look for a spike in heart attacks in Los Angeles during Super Bowl games from 2000 to 2004.

"We didn't see anything," Kloner says. "There was not even a hint of a signal of an increase of cardiovascular events around the Super Bowl."

Kloner admits that doesn't prove anything. The Los Angeles area hasn't had a pro-football franchise since 1994.