Accessibility links
Automated Marijuana Machines Unveiled in L.A. A medical marijuana dispensary in Los Angeles has taken a new approach to convenience for its customers. It has installed a high-security marijuana vending machine. People with doctor's "recommendations" can now use an ATM-like card to purchase medical weed, anytime of day or night. 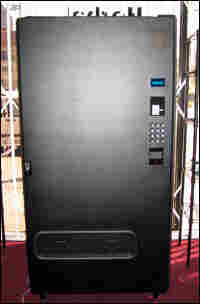 Medical marijuana patients slip pre-programmed membership cards into a reader on the front of the machine. An index finger is then placed on the glowing red sensor to confirm the patients' identity, along with the amount of money left on their card and their monthly marijuana allotment. Amy Walters, NPR hide caption 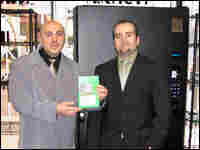 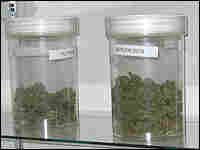 Cherry Bomb, OG Kush and Apollo II are a few of the types of cannabis sold at the dispensary. Amy Walters, NPR hide caption 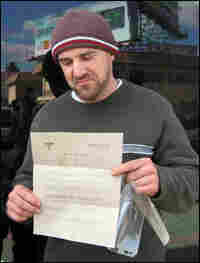 Human interaction is no longer needed to fill a doctor's recommendation for medical marijuana in California. A dispensary in Los Angeles has taken a new approach to convenience, unveiling a high-tech pot vending machine.

The sophisticated new apparatus was designed by 29-year-old lawyer Vincent Mehdizadeh. Dressed in a business suit, he does not remotely resemble the stereotypical stoner that some might imagine would devise such as creation.

Inside the Health Nutrition Center, a marijuana dispensary that Mehdizadeh owns and operates in Los Angeles, he shows off the machine. Large, black and heavily armored, it looks like something Darth Vader might have designed.

What's so special about this machine isn't the aesthetics; it's the security. The apparatus relies on a unique system that identifies the patient via a swipe card and biometric finger scan.

"OK, it's verifying me," Mehdizadeh says, passing his finger across the scanner. "And that click is the medicine dropping."

At the base of the machine, where you'd normally retrieve your can of Coke or your bag of pretzels, Mehdizadeh holds a palm-sized green box with a snap closure, containing the Nutrition Health Center's business card and, of course, the dope.

In order for a patient in California to get a weekly or monthly allotment of marijuana, he or she first has to consult a doctor. The doctor writes a "recommendation" (not technically a prescription) and the patient takes this "recommendation" to a dispensary.

To ensure that no one overfills their recommendation by going to more than one pot pharmacy, Mehdizadeh has designed a computer program that syncs with the swipe card.

Outside Mehdizadeh's business, patient Robert Miko says that getting marijuana from a vending machine instead of a person is very appealing.

"Some people when they come in here, they already know what they want, they get it and go," Miko says.

Miko is taking marijuana instead of pharmaceuticals to help him with anger management, he says. Without it, he says he's surly and violent. With it, "I'm friendlier, I'm compassionate, I'm not angry, I love people. I look at life and I love life."

That's fine with local authorities. Since 1996, it's been legal to use marijuana medically in California with a doctor's recommendation. Throughout Los Angeles, there are hundreds of dispensaries such as Mehdizadeh's.

The federal government has a different philosophy, however. Federal officials say, "It is illegal to use marijuana in the United States. Period."

That means that shiny, new machine dispensing marijuana in Mehdizadeh's center may be there for only a short time. The Feds always confiscate marijuana after a raid, he says, even if they have to use bolt cutters and a can opener to get to it.