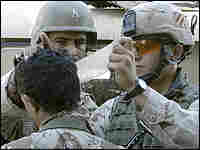 A U.S. soldier wraps the head of a wounded Iraqi soldier with a bandage following an attack in 2005. A new study suggests such head injuries in combat are associated with post-traumatic stress disorder. Karim Sahib/AFP/Getty Images hide caption

Traumatic brain injury has been labeled the signature injury of the Iraq war. It's estimated that between 10 percent and 20 percent of soldiers who have served in Iraq have suffered from this kind of wound.

Now, a new study published in the New England Journal of Medicine suggests that even minor traumatic brain injuries, like concussions, may be associated with long-term health problems, specifically post-traumatic stress disorder, or PTSD.

Researcher Charles Hoge surveyed more than 2,000 Army infantry soldiers who had returned from Iraq, and found that three to four months after their return, 43.9 percent of those who had experienced a concussion met the criteria for PTSD. Hoge, chief of psychiatry at the Walter Reed Army Institute of Research, characterized this as "a very high rate."

It's difficult to say exactly what is going on here, Hoge says. It could simply be that concussions usually happen during the kind of intense battles that also produce trauma, and so traumatic battles produce both head injury and PTSD. Or the research may indicate that concussions contribute to PTSD.

David Hovda, a professor of neurosurgery at University of California, Los Angeles, who has spent his life studying brain trauma, points out that there are real chemical changes to the brain in the wake of a concussion.

"It causes all the neurons — which are the cells in the brain — to fire. It's kinda like having a mini seizure," he says. "And this creates a change in the chemistry inside the brain, which can have long-term consequences with regards to how the brain responds to emotions."

While Hovda is not saying that concussions cause PTSD, he does believe that the physical and emotional changes that are the typical products of concussion — lethargy, anxiety, depression — may inhibit a person's ability to deal with a traumatic experience.

"If you are an individual who is experiencing these tremendous emotional changes that are associated with PTSD, and you are fighting also these problems associated with mild traumatic brain injury, it becomes very difficult to cope with the symptoms, and it's much harder for them to recover," Hovda says.

At this early date, it's impossible to say which of these explanations is correct. What is clear is that a large number of soldiers who have served in Iraq have suffered mild traumatic brain injury — concussions and other small injuries which appear to pass quickly, but which may in fact linger in ways that had not been anticipated.