Accessibility links
Recalling the Fear and Surprise of the Tet Offensive Forty years ago Thursday, North Vietnamese soldiers and Viet Cong launched a series of coordinated attacks against targets in South Vietnam. Tet marked the beginning of the end of U.S. involvement in South Vietnam.

Listen
Recalling the Fear and Surprise of the Tet Offensive

Refugees try to cross the broken bridge over Perfume River in Hue. The bridge was blown up by the North Vietnamese and Viet Cong in February 1968. Mark Ellidge/Keystone Features/Getty Images hide caption 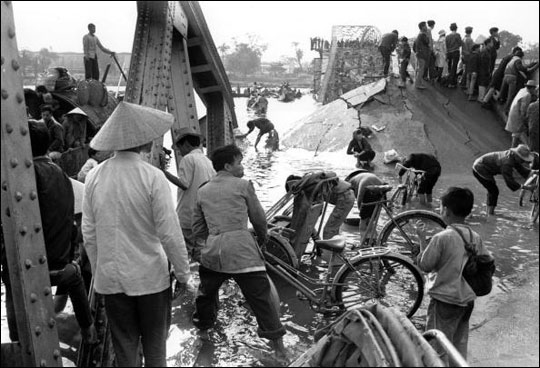 Refugees try to cross the broken bridge over Perfume River in Hue. The bridge was blown up by the North Vietnamese and Viet Cong in February 1968. 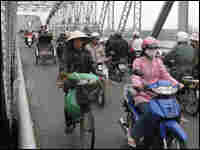 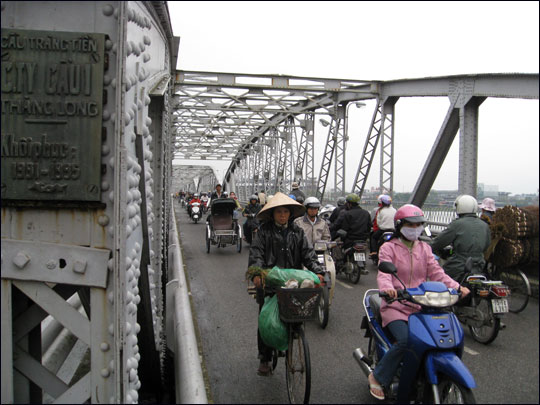 The bridge over the Perfume River today. 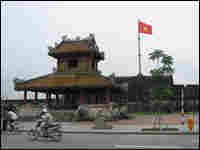 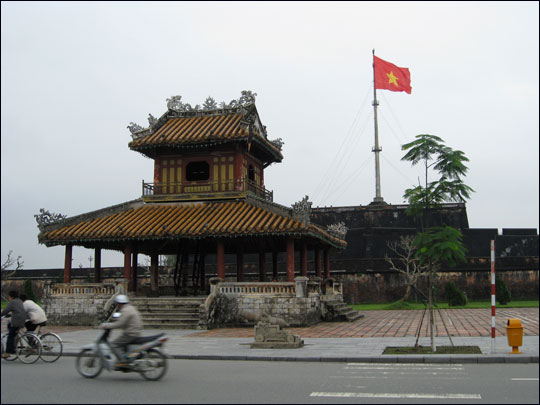 The Citadel in Hue flies the Vietnamese flag. 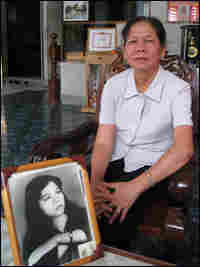 Vu Minh Nghia sits in her home in Ho Chi Minh City, formerly Saigon. Nghia was one of 15 Viet Cong assigned to attack the Presidential Palace in Saigon at the beginning of the Tet Offensive on Jan. 31, 1968. In the frame, a photo of Nghia from 1967. Michael Sullivan, NPR hide caption 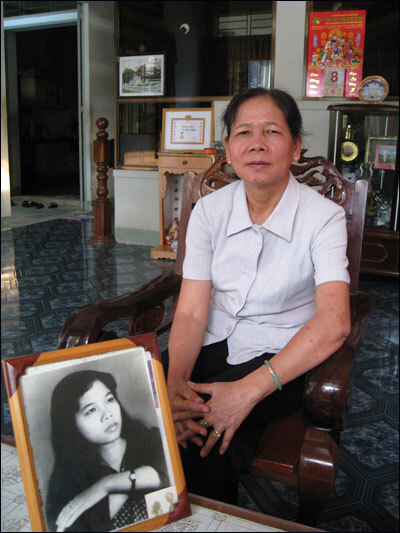 Vu Minh Nghia sits in her home in Ho Chi Minh City, formerly Saigon. Nghia was one of 15 Viet Cong assigned to attack the Presidential Palace in Saigon at the beginning of the Tet Offensive on Jan. 31, 1968. In the frame, a photo of Nghia from 1967.

Forty years ago Thursday, North Vietnamese soldiers and Viet Cong launched a series of coordinated attacks against targets in South Vietnam. Though the Communist forces were eventually beaten back — suffering huge casualties — the Tet Offensive marked the beginning of the end of U.S. involvement in South Vietnam.

When Tet began, Chuck Searcy was a 20-year-old enlisted soldier stationed in Saigon. He had gone to bed fairly early the night before following a movie and a few beers with his buddies.

"After midnight, the siren went off — the alert siren — which was our signal to go to our posts. So everybody gets out of the bunks, grumbling and bumbling, and put on all our gear and went out to the perimeter, assuming that 15 minutes later, we'd have the all-clear signal; we'd go back to sleep," Searcy recalls. "But then a captain came around the perimeter in a jeep with a loudspeaker announcing that this was not a practice alert, that Ton Son Nhut Air Base had been overrun and Saigon was getting hit very hard."

Searcy was with the 519th Military Intelligence Battalion. He says the attack caught almost everyone by surprise.

"It was the moment when the war became a reality for us, because up to then, Saigon had been considered a very safe area and quite secure and basically an area that would never be attacked," he says.

More than a dozen Viet Cong battalions took part in the attack on Saigon, which included a number of high-profile targets: the government-run radio station, the Presidential Palace and the U.S. Embassy — attacks brought into Americans' living rooms on their televisions.

Vu Minh Nghia took part in the assault on the palace. She was 21 at the time and the only woman in her 15-member team. They had slipped into the city the night before, she says, with orders to attack an army command post in Saigon's District 5.

"We met for the last time and our leader told us our target had changed — that our new assignment would be the Presidential Palace," she says. "We were very surprised. There were only 15 of us and the palace was very well defended — the nerve center of the city. But we were determined to carry out our mission."

Her team was discovered just short of the palace gate, Nghia says, but managed to fight its way into the palace grounds anyway, killing several South Vietnamese soldiers and a few Americans in the process. Shortly after that, though, things started to unravel.

Her team took heavy fire, she says, and the reinforcements it had been expecting never came. Eight members of the team were killed, the rest captured. Nghia spent the next six years in the notorious Con Dao prison.

U.S. and South Vietnamese forces regained control of most of the city in a matter of days. But in the old imperial capital of Hue, several hundred miles to the north, it took nearly a month.

Today, the fighting in Hue is limited to foreign tourists jockeying for camera position outside the Imperial Palace. But during Tet in 1968, Hue experienced some of the most brutal street fighting of the war after several thousand North Vietnamese regulars swept into the city on the morning of Jan. 31.

Nguyen Thi Hoa was 20 then — a civilian and mother of two with a third on the way.

"About 4 a.m., my mother got up to pray, and I heard the sound of gunfire and the heavy thud of footsteps," she says. "I opened my door slowly and saw many, many [North Vietnamese army] soldiers running by. They wore helmets covered with leaves. By dawn, the soldiers from the South had all run away."

The communist troops overran most of the city. By the time Capt. Chuck Meadows and Golf Company of the 2nd Marine Battalion made it to the walls of the Citadel that afternoon, the enemy was firmly in control.

"We were significantly outgunned and overmanned," Meadows says. "We made it to this corner and we started receiving very, very heavy automatic fire, other rifle fire, mortar fire, rocket fire. And I was sustaining a lot of casualties at that time. ... I had gone in there with probably, I'd say, 120 folks, maybe, at the most. And by the time we got to this corner, I had lost five killed and 44 wounded. I'd lost almost 50 Marines."

Meadows says his company lost more men in four hours than it had lost in the previous four months in the jungle. Urban warfare — against well-armed regular soldiers — was something totally new.

"There was nobody in our ... battalion, who had ever experienced anything like that, even though a couple of them had served in Korea. But they had not seen any of this kind of fighting at all," he says.

The Northern regulars and Viet Cong controlled parts of the city for weeks. Nguyen Thi Hoa and her family fled their home for a neighbor's early on. Her husband was a South Vietnamese soldier and the family knew the Viet Cong had a list.

An estimated 3,000 people with ties to the Southern regime were executed in Hue — many buried in shallow graves. Retired Gen. Nguyen Van Thu was one of the Northern commanders in Hue at the time.

"We had to eliminate those who followed our enemies," he says. "It was certain that we would arrest them and eliminate them. It is a normal thing during war. Just like the Americans and the Saigon regime arrested and killed those they suspected of supporting us."

The Northern forces were driven from Hue three weeks later. Nearly half the city had been destroyed and nearly 100,000 people were left homeless. Nationwide, the Tet Offensive was a crushing military defeat for the Communist forces. Politically — and psychologically — it was a major victory.

"The truth is, until the day I left, I never really felt safe again. I was always looking over my shoulder," Searcy says. "And in fact, the day I went to the airport to depart, my buddy who was driving the truck wanted to pull over and pick up a couple of South Vietnamese soldiers who were hitchhiking on the road, and we wouldn't let him stop because we were too paranoid that they might not be South Vietnamese soldiers, and they might cause a problem. We just wouldn't stop because we were too uptight."

President Lyndon Johnson and his advisers were rattled, too. After repeated assurances to the American people that the war was going well, the Tet Offensive convinced Johnson and many in his administration that the war was, in fact, untenable — and that the United States should begin to disengage. It would take seven more years — and many more American and Vietnamese dead — before the U.S. was finally out.