Accessibility links
The Second City Skewers Obama and Clinton The famous Chicago improvisation comedy troupe is taking shots at the presidential candidates. Its most recent revue, Between Barack and a Hard Place, got a pretty good review from Obama himself: He was seen belly laughing from the audience. 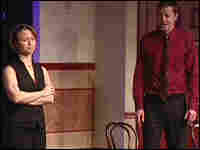 The Second City cast members Molly Erdman and Brian Gallivan perform "Killer," about a character named "Sillary Tinton" who is trying to hire a hit man to get rid of Barack Obama. Courtesy of The Second City hide caption 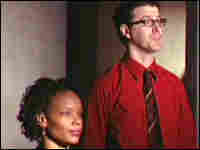 The Second City cast performs "I am Barack," which sends up Barack Obama's appeal to all different kinds of voters. Courtesy of The Second City hide caption 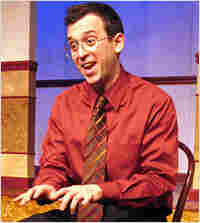 The Second City cast member Brad Morris says that part of the comedy troupe's job is "to find the line and then constantly play with the line." Courtesy of The Second City hide caption 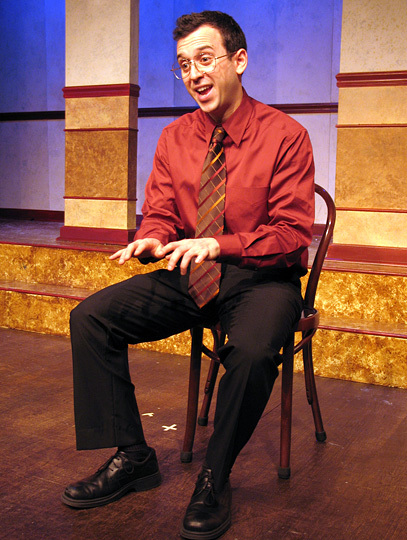 The Second City cast member Brad Morris says that part of the comedy troupe's job is "to find the line and then constantly play with the line."

Courtesy of The Second City

The Second City — the famous Chicago improvisation comedy troupe — is taking shots at the presidential candidates. Its most recent revue, Between Barack and a Hard Place, is one of the most popular Second City shows in recent years. It equally skewers Sens. Barack Obama and Hillary Clinton, both of whom have called Chicago home.

Along the stairs of the old, dark and drafty main stage theater is proof of how significant a role the group has played in the evolution of American comedy. Hanging on the wall are pictures of old casts — very young faces of Dan Aykroyd, Bill Murray and John Belushi, as well as Mike Myers, Chris Farley, Steve Carrell and Tina Fey.

There are reminders of Aykroyd portraying President Nixon, and hints that the seeds of Stephen Colbert's "truthiness" were sown here. So, it's no surprise that some of the sharpest takes on the 2008 presidential race are right here, too.

The show opens with a scene in which all six ensemble cast members are under their own spotlight, each taking a more absurd shot at Obama's effort to appeal to every slice of the American public:

"Hello white male Americans, I am Barack Obama. And I hope to become your next president. Let's face it, at heart, I am a white man. After all, my mother was from Kansas, and that's as white as it gets."

The Second City shows no fear in taking on the most sensitive issues in this campaign, including sexism and racism.

In one skit, called "Killer," a female character in dark sunglasses calling herself "Sillary Tinton" tries to hire a hit man to take out Obama. But the assassin refuses because he says he loves the Illinois senator. The "Sillary" character says, "You are the 11th assassin I've talked to, and they've all said the same thing. What is it with this guy?" The assassin wistfully says Obama is "just the right amount of black."

"That's a line that to me is pretty on the mark for a lot of Americans," Second City ensemble member Brad Morris says. "It's really close to saying, 'That's a black person I feel comfortable with.' And the fact that we're still having that conversation in America right now is something to play with, too."

Playing With the Line

Morris says the recipe for successful political satire is to take a little bit of truth and push it to the absurd — or to the border of being offensive.

"I feel like part of our job is to find the line and then constantly play with the line," Morris says.

"You want to hear raucous, cynical, hyenalike laughing, and then you also want to hear, bubbling up from underneath that, some groans, you know — and some, 'Oh, no!' You know, sometimes you just hear, 'No!' You want to hear that. That means you're doing your job."

"We have to push the limit. We have to hold their feet to the fire. We have to make fun of them. If you tick somebody off, at least you know they're listening," Carlson says.

He says the troupe's satire does not come from a mean-spirited place. But if people take the group seriously and get upset, he says, it's hilarious. "When they completely miss the point, it's like, where did you think you were coming? What did you think we were going to be doing?"

And nothing is as touchy, Morris says, as a scene that jokes about trying to assassinate a presidential candidate — and a black one at that.

"I got to watch Barack Obama watch [the show], which was very interesting," Morris says. "I have to say, he does know how to laugh at himself, because I watched, and that's some real dicey stuff. He was belly laughing. [Obama's wife] Michelle was there; she was laughing."

Obama's campaign confirms that the Obamas enjoyed the show and were not offended by it.

Now, Morris and the Second City cast have to write a new show that will open in April and run through the fall — without yet knowing who the nominees will be.

Carlson says the past couple of months of debates, speeches and gaffes — with candidates getting in and dropping out of the race — offer plenty of good material. But sadly, it's material that The Second City can't use.

"They're probably writing some political things right now, but it's changing so much that by the time we open, things that are happening right now will be long past relevant," Carlson says.

He and the cast hope the race gets more settled and a Democratic presidential nominee is apparent after the March 4 contests. They're writing jokes and skits making fun of Sen. John McCain, and they can't wait to find out which Democrat they'll be poking fun at as well.

Watch a Clip from 'I am Barack'

Watch a Clip from 'Killer'