'Crying in Your Beer' 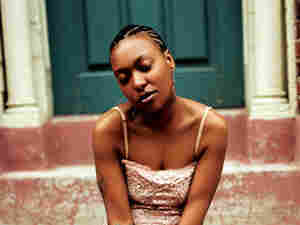 Me'Shell NdegeOcello's name means "free like a bird," which effectively describes her mix of funk, soul, R&B, hip-hop, reggae, rock, and jazz — as well as lyrics that explore the politics of race, sex, gender, and more.

The singer was born in Berlin and raised in Washington, D.C., where she attended the prestigious Duke Ellington School of the Arts while playing local clubs. But she eventually ended up in New York City, where she became one of the first artists to sign with Madonna's Maverick label in the early '90s.

NdegeOcello's early releases have earned her multiple Grammy nominations, and her cover of Van Morrison's "Wild Night" (a 1994 duet with John Mellencamp) became a massive hit. The critically acclaimed Bitter, 1999's brooding song cycle about a troubled relationship, cast NdegeOcello as a mature and unconventional chronicler of human behavior, but since then, she's taken more creative risks. After the stridently messy Cookie and a few forays into spacey jazz, the recent The World Has Made Me the Man of My Dreams includes guest appearances by everyone from Pat Metheny to Oumou Sangare.