Accessibility links
U.S. Tries for Better Conditions at Iraq Prison Camp The American military is trying to improve conditions at Camp Bucca, a prison camp in southern Iraq, including its family visitation program. They see the effort as an opportunity to win over the most disaffected Iraqis and the people closest to them. 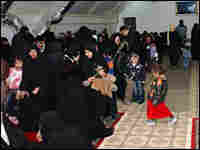 Iraqi families visiting Camp Bucca wait for the bus that will take them to meet with their detained relatives. Courtesy Department of Defense hide caption 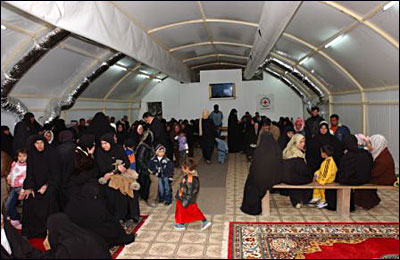 Iraqi families visiting Camp Bucca wait for the bus that will take them to meet with their detained relatives.

The U.S. military is trying to improve conditions for the nearly 20,000 inmates it's holding at Camp Bucca, a prison camp in the desert of far-southern Iraq.

U.S. commanders see the effort as part of the counterinsurgency — an opportunity to win over the most disaffected Iraqis and the people closest to them. One aspect they are trying to improve is the family visitation program.

The surroundings in the family waiting room at Camp Bucca aren't fancy, but they are at least as good as anything the Americans there have for themselves. The room is crowded, mostly with women and children. The women's flowing garments drape the wooden benches in black.

Col. James Brown, Camp Bucca's outgoing commander, is proud of the waiting area, and he wants to make it even better.

Brown says he wants Camp Bucca to reflect the American values of fairness and generosity. Zack, the Iraqi cultural adviser at the waiting area, introduces one example — the wife of a detainee.

She is holding her son, an 18-month-old boy with a hole in his heart.

"You see the face is blue, completely. And before 24 months, if he gets the surgery, he had opportunity to live. After that, it will be too late," the cultural adviser says.

Brown explains that one of the doctors who came to assess prisoner health at the camp happened to be a pediatric cardiologist.

"And she said, 'Well, this is easy. I've already got six babies that I've gotten medical care for already, and we can do this again,'" he says.

Brown says his team has arranged to get the family to Jordan, where the surgery will be performed.

As much as Brown strives to improve the family experience at the camp, there are external factors that he can't do much about.

Mahdi lives in the Baghdad slum called Sadr City with her five children. She and her mother-in-law took the 10-hour bus ride down to Camp Bucca in the stifling heat of summer, only to find that she was not on the list of those authorized to see her husband.

"On my first visit, I took all my children with me, but they did not allow me to see him," she says. "They only let the kids inside... I started to scream, cry and beat my head because I had gone through so much to get there."

Mahdi didn't know that the Red Cross pays the expenses of families who visit the detainees, so she paid the costs of bus fare, food and three days in a cheap hotel out of her own pocket.

Another problem is that security measures the U.S. military regards as normal and necessary are frightening and humiliating for Muslim women.

"They stripped me of my scarf and searched my hair," says Mahdi's mother-in-law, Ameen. "I didn't know how to stand in the screening machine. I was sick, but they forced me to stand inside that machine."

The place where visitors get to meet their loved ones is a white-walled room with a partition, through which inmates and their families can talk.

"We allow [the] children to cross the line, and dads can hold their kids. We do allow them, you know, contact hugs," Brown says.

Zahra Mahdi did get to see her husband on her last visit, just three months ago. She doesn't remember the pleasant amenities so much as the shortness of the visit.

"We had to go through all this, just to see him for two hours. Time passed so quickly, and afterwards they ordered us out," she says.

Brown wants the visits to transform the families' view of Americans, but that's not what Mahdi remembers.

"We were trembling all the time, so afraid of the Americans," she says. "The Americans just yelled at us, and we could not understand what they were saying."

Brig. Gen. Robert Hipwell, who is taking over as commander of Camp Bucca, says he's just as committed to making the visitation program as successful as it can be. But like Brown, he will face the difficulties of running a volatile detention camp and the cultural barriers between Iraqis and Americans.

It may be that no amount of good will and hard work can make the experience a happy one.