Accessibility links
Has Hollywood Helped Pave Way for Obama? Racial and gender barriers have already been broken at the White House — well, at least in Hollywood. But if voters have seen a black man as president on the screen, are they more likely to elect one in real life? 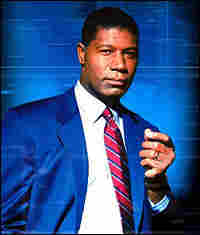 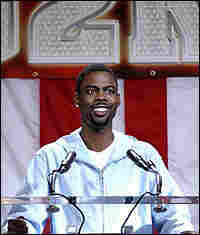 In Head of State, the sudden death of the party front-runner leads Mays Gilliam (Chris Rock) to run for president. hide caption

With Barack Obama's candidacy, some Americans — and more than a few journalists — have posed the question: "Is America ready for a black president?"

Voters are about to answer that question, but Hollywood weighed in long ago. Morgan Freeman reassured the nation from the Oval Office in the doomsday film Deep Impact. Chris Rock rode a populist campaign to the White House in Head of State. And the popular TV show 24 has served up not one but two black chief executives.

Of course Hollywood has produced all kinds of presidents we've yet to see in real life: women, Latinos, handsome single dads who date brainy, beautiful lobbyists. But with Obama in mind, we wanted to test a question about a black man in the Oval Office: After voters have seen several black presidents on screen, are they more likely to elect one in real life?

We put the question to Todd Boyd, professor of critical studies at the USC School of Cinematic Arts. His initial response?

"I'm a bit hesitant to say that because James Earl Jones or Morgan Freeman or Dennis Haysbert played a president on a TV show or in a movie, it means Barack Obama can be president," Boyd says. "I think that's a bit of a stretch."

Boyd goes on, though, to tell NPR's Michele Norris that such representations — especially those like 24's, beamed weekly into American living rooms — "may have unconsciously made some things in society seem less troubling" than if there'd been no pop-culture pictures of a black president.

And he offers a thought or two on how pop culture might respond if reality caught up with fiction, and Barack Obama — or another African-American politician — gains the White House.