Accessibility links
Jack Johnson Tunes in the 'Static' Known for his sunny, acoustic leanings, singer/songwriter Jack Johnson is back with a dark, electric record, Sleep Through the Static. Johnson stopped by to play some songs from the album.

Jack Johnson Tunes in the 'Static' 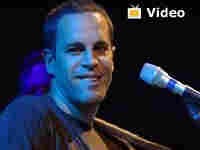 Jack Johnson's new album, Sleep Through the Static, is a little more electric and a little darker than his previous efforts — but just a little. At its core, it's still vintage Jack Johnson. The surfer-turned-crooner joined the Bryant Park Project recently for an in studio interview and performance.

"More than anything, I've always liked The Swiss Family Robinson, and I love reading books about Pitcairn Island. There's a book called An Island to Oneself about this guy who decides he's going to go live on this little island and see if he can survive," Johnson says.

Johnson learned to live off the land as a child, he says, when his father would take him on extended camping trips with limited supplies. Recently, the musician bought 50-gallon containers from a local bakery in his home state of Hawaii and rigged them to collect rain water for his garden.

Does that make him the musical MacGyver? "Yeah, MacGyver's another favorite," he says. "I love that show."

Video: "Sleep Through the Static"