Accessibility links
Clinton, Obama Target Latino Voters in California In California, Hispanics make up about 40 percent of the population, and they are expected to account for about 20 percent of the Democratic vote on Tuesday. Both Hillary Clinton and Barack Obama are working hard to win that key constituency. 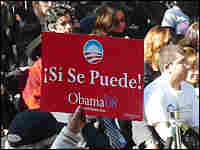 A sign for Barack Obama proclaims "Si Se Puede" — or "Yes We Can" — at a campaign event at Los Angeles Trade Technical College on Thursday. The Obama campaign is using the rallying cry of Cesar Chavez and the United Farm Workers union. Don Gonyea, NPR hide caption 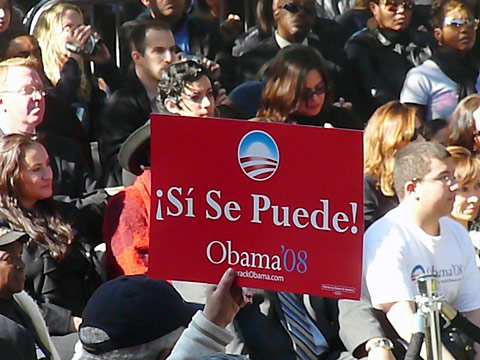 A sign for Barack Obama proclaims "Si Se Puede" — or "Yes We Can" — at a campaign event at Los Angeles Trade Technical College on Thursday. The Obama campaign is using the rallying cry of Cesar Chavez and the United Farm Workers union. 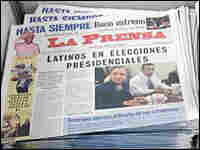 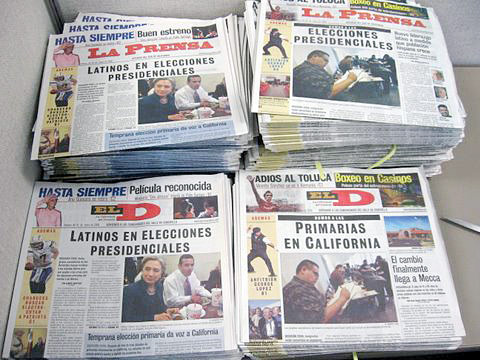 In California, Hispanics make up about 40 percent of the population, and they are expected to account for about 20 percent of the Democratic vote on Tuesday. Both Hillary Clinton and Barack Obama are working hard to win over that key constituency.

Obama's call of "si se puede" — or "yes we can" — has a special resonance for many Latinos who remember when the phrase became the rallying cry for Cesar Chavez and the United Farm Workers union in the 1970s.

"I'm very enthusiastic, the way he has embraced our rallying cry of 'si se puede,' " says Obama volunteer Francisco Sola, a computer programmer. "He called [it] a timeless creed."

Alfredo Figueroa, assistant dean of students at the University of California-Riverside, is another Obama volunteer.

"When we first heard it, we automatically tied it into Cesar Chavez. ... [Obama] is telling us, 'All of what you guys went through made it possible for me to be here today,' " Figueroa says.

But despite Obama's use of its well-known slogan, the United Farm Workers union has endorsed Clinton.

Gloria Macias Harrison, a member of the Kiwanis Club of Greater San Bernardino and president of Crafton Hills College, has already cast her vote — for Clinton.

"For me, it's not a race issue, it's more a gender issue, because in my mind, the good old boys come in all colors: white, brown, pink, yellow or green," she says.

Harrison has heard Obama take up the old union cry, and she's not impressed.

"I knew Cesar Chavez; I knew what he stood for. It's not enough to have somebody say 'si se puede.' ... What do you stand for? What kinds of things have you championed? What do you have a passion for? Those are the kinds of things I want to see," Harrison says.

Candidates Woo Latinos on the Airwaves, in Person

In a state as vast as California, the campaign for Latino votes is largely conducted on the airwaves. This week, both Clinton and Obama started running new ads on Spanish language stations here.

A couple of weeks ago, Clinton ate lunch at King Taco with the mayor of Los Angeles, Antonio Villaraigosa, a national co-chairman of her campaign. It made headlines and raised some eyebrows.

"The classic thing is that [candidates] come in, and they eat the Mexican food, and somehow that makes them understand us better.

"If somehow they can handle a little chili on their tacos, they're OK by us. That's been the standard kind of electioneering that's gone on in the past. I have a little bet with my staff to see which one is the first one to put on a sombrero," he says.

Ramirez won't be collecting on that bet: He put his money on Rudolph Giuliani.

Obama Needs to Shore Up Ties

Iconic labor leader Dolores Huerta was co-founder of the United Farm Workers union and is one of Clinton's most prominent Latino endorsers.

Huerta coined the phrase "si se puede" with Chavez in the 1970s.

"I think [Obama] is trying to establish a relationship with the Latino community which he does not have. And I think he was using kind of a shortcut. So if he could use 'si se puede,' that might somehow identify him, but he really does not have a relationship and people really don't know who he is. And I think that's one of the big advantages that Hillary Clinton has, because they do know her, they trust her, and they have confidence in her," Huerta says.

"His personal experience — as the son of an immigrant father, the son of a single mother — those are all things that [are] not shortcuts. He's never taken a shortcut. He's taken solid steps one by one by one," she says.

Nonetheless, Durazo admits Obama's quest for the Latino vote is an uphill battle.

In the two states with sizeable Latino populations that have voted so far — Nevada and Florida — Clinton has won the Latino vote by wide margins.

On the campus of the University of California-Riverside, senior Miguel Cruz is one Latino student who says he will vote for Clinton on Tuesday.

Cruz says he believes that many people in the United States may not want Obama to be president because of his color.

"That's why I feel that Hillary Clinton has a better chance of winning. She might be a woman, but she is of the white race. So I'm pretty sure that her chances are better," he says.

Clinton supporters point to her longstanding ties with the Latino community and say they expect her to do very well among Hispanic voters here Tuesday.

Obama got a comparatively late start in building those connections and is more of an unknown. But there are cartons full of red posters in his Los Angeles office emblazoned with the hopeful message of "si se puede."