Accessibility links
Microsoft Faces Big Hurdles in Bid to Topple Google Microsoft's bid to buy Yahoo further demonstrates its desire to compete with Google, which has dominated the Web search industry. But analysts warn that Microsoft and Yahoo each bring flawed Internet strategies to the table, while Google holds a strong hand.

Yahoo's board of directors says it is looking over a $44 billion bid from Microsoft to buy the company. Microsoft has been quietly trying to acquire Yahoo for at least a year in its attempt to become a more formidable challenger to Google. But even a combined Microsoft-Yahoo will have a hard time overtaking the nation's dominant search engine.

When it comes to search and the ad revenue related to it, Google is No. 1, hands down.

"Google has become a verb," notes David Smith, an analyst with the research company Gartner. "People think they're going to go Google something, and it's become just basically part of the lexicon of the way people talk and act today."

Google now has around 60 percent of the search market, and its share is growing. Yahoo is a distant second, with about 16 percent. Smith says Microsoft can't seem to win much more than 4 percent of that market, so the company is buying it.

"They had to make a big change and make a big investment and basically buy a large amount of market share," Smith says.

A combined Yahoo and Microsoft will indeed be bigger in size, and their combined resources are likely to make them a more formidable foe to Google. But Professor Jeff Jarvis of the City University of New York, who follows new media, thinks Google is going to keep on taking market share away from Microsoft and Yahoo. He says that's because Google puts its ads up wherever users go, whereas Yahoo is still set up like an old-time Web portal: Users must go to it.

"Google is built for trying to make sense of the entire world, whereas Yahoo is built in trying to get us to come to it and see what it wants to show us, like an old-media company," Jarvis says.

But the habits of Internet users change fast. In recent years, they've have been drifting from one site to the next. Analyst Rob Enderle thinks that's changing: He says users are once again going to Web sites and sticking around.

"Be it Amazon for shopping or Facebook for social networking, people go into that and they kind of stay in that environment," Enderle says. "So it looks like the market has stepped back a little bit from the Google phase."

Microsoft has already purchased an interest in Facebook. Yahoo remains the most popular Web portal and owns the trendy photo site Flickr. Still, Yahoo is struggling and about to make layoffs. And Microsoft's search engine has just never really taken off. Enderle believes a combination of the two could just be a problem sandwich.

"If it comes together and all we do is get an accumulation of both companies' problems, it's not going be a good ending," he says.

The possible merger is also likely to face scrutiny from anti-trust regulators in the U.S. and Europe, and that's likely to hold up the merger a year; meanwhile, Google is likely to continue to dominate. 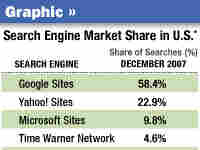 A look at the 2007 annual revenues for the two companies involved in the deal and their main rival:

Microsoft Corp. has made an unsolicited bid to buy Yahoo Inc. for $44.6 billion. Yahoo has said it will consider the offer, which would unite two companies looking to increase their Internet search traffic and advertising revenues in the shadow of Google Inc.'s dominance.

If approved, the deal would be Microsoft's largest ever. The move raises questions about what's at stake for Yahoo, as well as Microsoft, and what government hurdles may have to be cleared.

What does Microsoft stand to gain in this deal?

Microsoft would be paying a lot of money, $44.6 billion, but the company has been eager to improve its position among search engines and compete with Google, the undisputed leader in online search. A combined Yahoo and Microsoft would have about a third of the U.S. search audience, which would still trail well behind Google's nearly 60 percent, according to data from comScore, which measures the market.

Microsoft also would like to get a bigger share of the online advertising market, which the company estimated at $40 billion last year and expects to grow. Yahoo's themed search areas, like finance and sports, draw the eyes of customers who visit the site for its free e-mail and instant-messaging programs and could offer greater opportunities for advertising. Microsoft also could use its sizable pocketbook and software power to entice more ads to the merged company.

What's in it for Yahoo?

Financial stability. In the last year, Yahoo's finances have deteriorated. Earlier this week, the company announced a 23 percent drop in quarterly profits, then said it would cut some 1,000 jobs — about 7 percent of its workforce. The company has also given a cautious outlook for 2008. For shareholders, Microsoft's offer of $31 per share — 62 percent more than what Yahoo's stock was worth when the market closed Thursday — has to be attractive.

Yahoo also would gain access to Microsoft's extensive computing power and data capacity, which might make it possible to offer software like Microsoft's Office suite over the Internet.

This isn't the first time Microsoft has made an offer. What happened last time?

Microsoft and Yahoo have talked about a possible deal since 2006, and the software giant made a similar offer last year. Former Yahoo CEO Terry Semel rejected that deal, but Semel resigned from Yahoo's board on Thursday. As Microsoft's CEO Steve Ballmer said in a letter sent to Yahoo's board shortly after Semel's departure, "A year has gone by, and the competitive situation has not improved."

Could government regulations stand in the way of a deal?

The Justice Department has said it would be interested in looking into the potential takeover to see if it would violate any antitrust regulations. But the bigger hurdle could be overseas. The European Union, which could play a role in approving the deal, has shown concern about Microsoft's dominance in the software market. In October, Microsoft ended a lengthy legal battle with European regulators in an antitrust case that cost the company millions of dollars in fines.

Are there other possible bidders?

While a surprise bid from another quarter is always possible, any company would find it difficult to compete with Microsoft's vast resources.

Written by Erica Ryan, with reporting by Uri Berliner.