Accessibility links
The Little Tramp: Frequently Down, Never Out France called him Charlot, Ecuador called him Carlitos — and audiences the world over knew him as "the Little Tramp." For NPR's ongoing In Character series, Bob Mondello pays homage to the ultimate silent-movie clown.

Listen
The Little Tramp: Frequently Down, Never Out 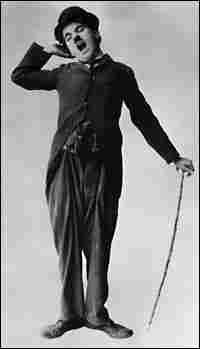 Becoming The Tramp: One year and 40 short features separated the film that introduced Charlie Chaplin's most famous character and the feature that brought him fully into focus. By 1915, the look — baggy pants, tight coat, shabby shoes — had reached its final form. Hulton Archive/Getty Images hide caption 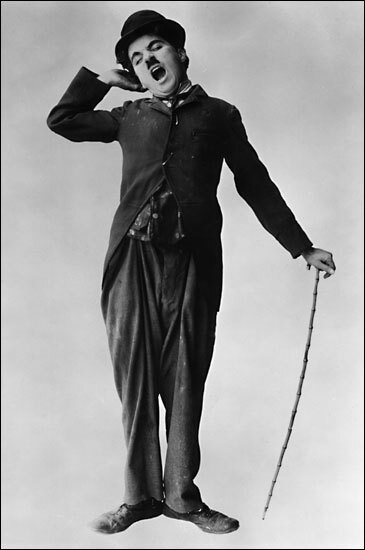 Becoming The Tramp: One year and 40 short features separated the film that introduced Charlie Chaplin's most famous character and the feature that brought him fully into focus. By 1915, the look — baggy pants, tight coat, shabby shoes — had reached its final form.

The Tramp on Video 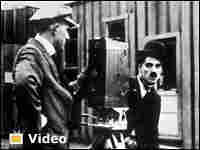 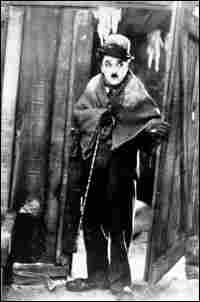 'Sno job for a little guy: The Little Tramp in Gold Rush. Life often left him down — but never for long. MPI/Getty Images hide caption 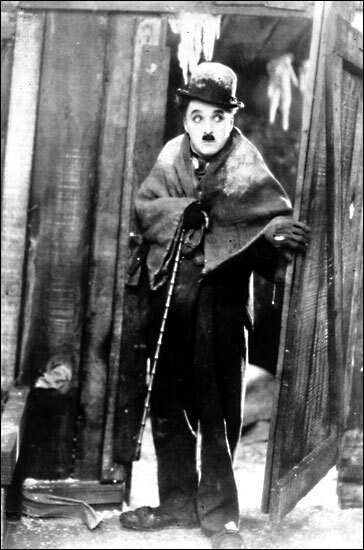 'Sno job for a little guy: The Little Tramp in Gold Rush. Life often left him down — but never for long.

On the In Character blog: Bob Mondello explains what's magical about the handful of feature films that starred Charlie Chaplin's Little Tramp.

Venice Beach was having children's box-car races on the day in 1914 that Keystone Studios gave its newest comedian a second chance. Music-hall comic Charles Chaplin hadn't been very funny in his first movie short. But the sun was bright, and a camera crew was going anyway, and studio head Mack Sennett figured the races would be a lively backdrop, even if his comedian flopped again.

As it happens, Chaplin had a good idea for the short that ended up being called Kid Auto Races at Venice. He'd play a camera hog — a guy who kept getting between the film crew and the kids driving their homemade cars.

But how should he look? Rummaging through Keystone's closets, he assembled a grab-bag costume: Fatty Arbuckle's pants, a bamboo cane, a bowler hat. Chaplin wrote in his autobiography that he decided that a look made up of opposites might be funny: "pants baggy, coat tight ... hat small, shoes large."

And when he couldn't decide whether to look old or young, he added a toothbrush moustache, figuring it would add age without hiding his expression.

"I had no idea of the character," he wrote, "but the clothes and the makeup made me feel the person he was."

That person — who turned out to be a creature of opposites, shabby but fastidious, unemployed but resourceful — took a while to come fully into focus in Chaplin's mind. But already, in that first appearance, there are hints of the man he'd be: The elaborate nonchalance as he shuffles again and again into the camera frame, the politeness with which he tips his hat to the cameramen who keep shooing him away. The persistence, the grace, the sheer skill with which he almost apologetically gets in everybody's way. You can't take your eyes off him. He won't let you.

A Shrug and a Kick

A year and some 40 short comedies later, Chaplin made a picture that was actually called The Tramp. By that time, he was famous — but his tramp costume and character were no more identified with him than were the roller skaters, carpenters, and firemen he'd been playing in other films.

Still, this time, something about the Little Tramp caught the audience's attention — perhaps because there was more of Chaplin in him. The comedian had grown up desperately poor, shuttling from workhouse to orphanage to the Central London School for Paupers.

And he used that. This time, the Tramp was really shabby: patches on his clothes, holes in his shoes. And that made his insistence on being gentlemanly and dignified all the funnier.

It also made his little masquerades intriguing. Not having a profession, this underdog with no fixed address, no real identity, could pick up any role required of him. Ask him to work a farm, as happens in The Tramp, and he becomes a farmer on the spot. Put a violin in his hands, and he'll make gypsies weep. Mistake him for a policeman, and he can be that too.

And because he was always found out, always had to return to being rootless and poor, audiences didn't just laugh at him; they felt for him. That was new.

And it pointed Chaplin down a different path than the one traveled by other silent comics, a path he shuffled down at the end of The Tramp in a fashion that would become a trademark: trudging away from the camera dejectedly, and then, just before the image fades, shrugging his shoulders, giving a little kick, and in a lighter, more hopeful mood, sauntering on.

In that shrug and that kick, there was a promise he made to audiences. Life might knock the little guy around, but he'd always pick himself up, ever hopeful, ever resourceful.

In the longer features that followed, he made good on that promise: as a prospector in The Gold Rush, who, when starvation threatens, serves a boiled shoe as if it were five-star cuisine. As a clown in The Circus, who can make audiences howl, but only when he isn't trying. As a boxer, and a street sweeper, and anything else he had to be in City Lights to pay for an operation that would let a blind girl see again.

(The fact that when she could see, she'd see that he was just a tramp? Well, there's always a catch, right?)

Audience affection for this polite, plucky little hobo exploded — worldwide. Chaplin was mobbed on trips to England. Paris declared a public holiday when he arrived for the premiere of The Kid. One theater played his films continuously from 1914 to 1923, stopping only because the building burned down. Nijinsky's ballet company quit dancing — in midperformance — to embrace him. He was adored, not just by the immigrants, factory workers and street kids who felt he was one of them, but by politicians, philosophers, sophisticates of every stripe.

But sophistication of a technical sort threatened to undercut the Little Tramp's universality. Silence became old hat when The Jazz Singer ushered in talkies in 1927. Chaplin had a perfectly pleasant speaking voice, but he knew that when audiences heard him, the Little Tramp would start being specific.

So he stalled, through The Circus in 1928, through City Lights in 1931, all the way to Modern Times in 1936 — nine years after everyone else on screen was jabbering away.

And when he finally let audiences hear the Little Tramp — at the very end of what is basically a silent comedy with sound effects, it's in a nonsense song, with fake Italian lyrics to hide his British accent.

With some recorded laughter, and that little triumph of nonsense — language that doesn't communicate, while the singer tells the song's story in gestures — the Little Tramp had to fade away, or he'd become like everyone else. And the character's great unspoken secret is that as much as he wants to be like everyone else, he can't be.

And at the end of Modern Times, that's what he does — for the last time. There would be other Charlie Chaplin films, but this was the Little Tramp's last stand. He was silent, and though he'd carried on for nearly a decade after everyone else had given up, silence was finished.

So there he is on that dusty road again, chased out of town — for the first and only time with a companion, the girl who convinced him he could sing that song.

The shrug-and-a-kick? Well, that would be awkward, hand-in-hand, so he does them on a title card: The girl has sobbed, "What's the use of trying?" And he has replied, in words that would surely sound foolish if he said them aloud: "Buck up ... Never say die. ... We'll get along."

And then, with his companion by his side, his cane in hand, and an expression of utter confidence that next time things will go better, he fixes his eyes on the horizon — and strolls away.