Accessibility links
Black Endorsements Divided in New York African Americans have always been among Hillary Clinton's most reliable constituents, but support from black leaders is split. Although Clinton has won the support of political stalwarts like Rep. Charles Rangel and others in Harlem, Barack Obama is gaining traction in Brooklyn and beyond. 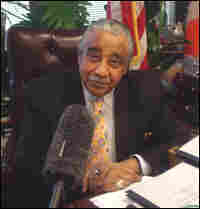 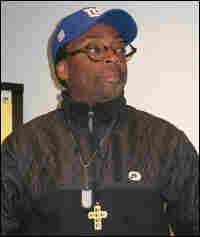 EXTRA AUDIO: Spike Lee Discusses Race and Politics and Why He Disagrees with Gloria Steinem

Among other targets, Clinton will be pushing hard to solidify support among black voters. African Americans have always been among her most reliable constituents, but endorsements from black leaders are divided.

Although Clinton has won the support of political stalwarts like Rep. Charles Rangel and others in Harlem, Sen. Barack Obama has significant support among young politicians in Brooklyn and beyond.

Overall, Clinton is still ahead in the New York race, according to polls, but her lead is slipping, says New York University urban planning professor Mitchell Moss. A little drop can bring serious consequences, because unlike the Republicans, the Democrats do not have a winner-take-all system. A candidate need only win one-third of the vote in a congressional district to take 40 percent of the state's delegates. This means that even if Clinton wins the popular vote in New York — as the polls suggest she will — Obama could take a significant number of delegates.

Among people walking around Harlem, the traditional cultural headquarters of black America, Clinton's hold seems to persist, however.

Clinton also has the backing of The New York Amsterdam News, Harlem's newspaper for more than 100 years.

Obama has not paid sufficient attention to Harlem, says Elinor Tatum, the publisher and editor-in-chief of the paper.

"It was an extremely difficult decision. Are we voting for the candidate that will serve the community best or are we voting for someone on the basis of color?" Tatum says. Ultimately, it came down to the former.

"Barack Obama has been to New York dozens and dozens of times. But he's tended to be downtown. He's been up to Harlem, maybe twice now ... he can't just assume that he'll get the vote because the color of your skin. He needs to say, 'I want to sit down and break bread with you,'" she says.

"One good reason is because I know her," says Rangel, laughing. "I mean, I've known her for so long. I admire and respect Sen. Obama and there' s a deep sense of racial pride, but in the picks and turns of our deficit — it's kind of rough for anyone to get on-the-job training. The real question is,when you get to that desk, how many names do you have in the Rolodex?"

His wife, however, is an Obama supporter.

Alma Rangel is not the only one breaking with Harlem's political leaders.

"We're not having it no more!" he says. Although "these old fuddy duddies" may have endorsed Clinton, he says, Harlem is no longer the capital of black power it once was. Brooklyn, which has more blacks than any other place in New York, is increasingly important.

What's more, many of Brooklyn's black residents are first-generation immigrants from the Caribbean and Africa. This group, polls show, overwhelmingly support Obama.

Brooklyn State Assemblyman Hakeem Jeffries, who is serving his first term, says that Obama has been a source of inspiration for many years.

The sentiment extends beyond state and racial boundaries, Jeffries says.

"What we've seen not just in Brooklyn but with Cory Booker in Newark, with Fenty in Washington, D.C. ... all of us are with Sen. Obama because I think he's speaking to a dynamic that we've all lived," Jeffries says. "Yes, we want to represent African-American communities successfully ... but affordable housing — it's not just a black issue or a white issue — it's all about the color green."

While part of Obama's appeal to some is that he transcends race, Lee says he's far from a post-racial candidate.

"We are getting there, but it still matters. It matters so much that Bill Clinton tried to point it out several times," he says. If Obama sometimes minimizes his focus on race, Lee does not blame him. "He's trying to unite America, so if he is number one a 'race man,' that's not going to get it, when you're saying you want to unite everybody."