Accessibility links
McCain Too Moderate, Some GOP Conservatives Say A new poll from the Pew Center for the People and the Press, shows Sen. John McCain of Arizona with a strong lead over the other Republican presidential hopefuls. Yet some conservative Republicans say McCain is too moderate a GOP candidate. 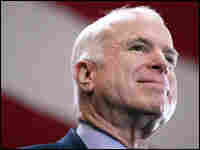 Blog of the Nation: What do Republicans want?

A new poll from the Pew Center for the People and the Press, shows Sen. John McCain of Arizona with a strong lead over the other Republican presidential hopefuls. Yet some conservative Republicans say McCain's voting record shows him to be too moderate a GOP candidate. 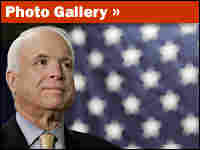 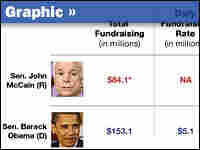 Perhaps no other presidential candidate exemplifies the vicissitudes of the campaign trail better than Arizona Sen. John McCain.

McCain saw his campaign founder over the spring and summer of 2007 due to weak fundraising, staff mismanagement and a lack of support from party conservatives, who viewed McCain's plans to overhaul the nation's immigration system as a sneaky way to grant amnesty to illegal immigrants.

But McCain still needs to woo conservative Republicans, who booed him before he spoke at a Washington, D.C., gathering of the Conservative Political Action Committee. Conservatives were never wild over McCain, and that goes back to his battles with George W. Bush in the 2000 primaries, his scathing criticism ("agents of intolerance") aimed at Christian conservative leaders, and his championing of overhauling the campaign finance system. McCain also voted against the Bush tax cuts in 2001 and 2003 (although now he says he wants to make them permanent), and he opposed amending the Constitution to prohibit same-sex marriage.

His status as his party's presumptive presidential nominee caps a remarkable comeback.

In the fall of 2007, many voters and pundits had all but written him off. But McCain persevered, focusing his efforts on New Hampshire, the state he won in 2000 in a landslide upset over Bush. And thanks to key endorsements – including one from the conservative Union Leader , New Hampshire's largest newspaper – McCain clawed back to the top of the pack. He won the Granite State's first-in-the-nation primary on Jan. 8 with the help of independent voters, moderate Republicans and New Hampshire residents dissatisfied with President Bush.

Perhaps an even more satisfying triumph came in South Carolina on Jan. 19, when McCain edged out rival Mike Huckabee, the former governor of Arkansas, in a tight race in a state that spelled the beginning of the end for McCain's presidential bid in 2000. Since 1980, the first time the Palmetto State held a Republican primary, the winner of the GOP primary there has always gone on to become the party's nominee. McCain's triumph in the state this time around solidified his return to front-runner status.

But "front-runner" is perhaps an uncomfortable position for McCain, who seems to relish the role of the underdog. He first ran for president as a maverick in 2000, leading a crusade to change the Republican Party. McCain's attempt to build on that victory was halted by the GOP establishment's decision to rally behind Bush; his campaign was also hampered by the fact that participation in most primaries was limited to registered Republicans. In states where independents and Democrats could cross over, McCain did well. In states where the voting was restricted only to Republicans, McCain suffered. He was gone from the race by March.

One thing critics cannot accuse McCain of: bending to public opinion. He was an early critic of the management of the war in Iraq at a time when polls showed strong support for it among Republicans, and he has long called for more troops to be sent to the region. Last summer, he supported the president's troop "surge" strategy when it was widely unpopular (though not with the Republican Party base). With the "surge" now seen as successful in quelling the violence there, McCain's views appear prescient.

One problem McCain still faces is less ideological than geological. He is currently 71, and if elected, would be the oldest person to win the White House. There are questions about his health, as well: He has undergone surgery for skin cancer before.

McCain first rose to national prominence as a Vietnam War hero. Shot down over Hanoi, he spent more than five years as a prisoner of war, where he was subjected to brutal beatings and bound by ropes into painful positions for hours at a time. The effects linger: To this day, McCain cannot fully extend his arms.

McCain moved from Virginia to Arizona in the early 1980s to launch his political career. He won an open House seat in 1982 and was the logical successor to Barry Goldwater when the senior senator stepped down in 1986. In his four Senate campaigns, he was held to under 60 percent of the vote only once.

The low point of McCain's career came in 1991, when he was one of five senators who allegedly did favors for a California savings-and-loan chairman, Charles Keating, who was under investigation by the Federal Home Loan Bank Board. A chagrined McCain says his involvement with Keating was probably responsible for his later efforts to reform the way campaigns are financed.