Accessibility links
Love Letter for a Fat-Tire Bike She saw it hanging in an Anchorage shop, the ride she'd trust for 350 miles of ice, snow and not always broken trail. Jill Homer writes a love note to her Pugsley, the bicycle with really wide tires.

Love Letter for a Fat-Tire Bike

Love Letter for a Fat-Tire Bike 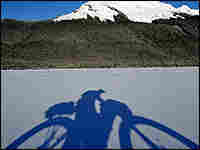 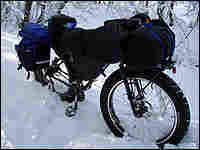 Jill Homer is training to bike 350 miles in February's human-powered Iditarod Invitational. To help her cross the vast great frozen, Homer will rely on an unusual bike, a Pugsley. She's unabashedly in love, as she writes below..

I'll never forget the first time I laid eyes on you, dangling from the ceiling rack at the Anchorage REI. An arctic blast of nitrogen-freezing proportions was ripping outside as I browsed the headlamp aisle. That's when I first caught a glimpse of your well-endowed wheels. I felt like a Valley girl in a bad '90s rap video ... "Oh, my, god. Becky, look at his butt. It is so big." You looked like one of those fixie guys' Frankenbikes. But, you know, who understands those fixie guys, anyway?

You moved on to other things. So did I. I was new on the winter bike scene, and convinced that studs were more my type. Those carbide-pierced tires were so punk rock, and I was thrilled by the way they gripped onto ice and never let go. But when the snow really started to settle in the relationship, the studs just bogged down like a pothead with a Nintendo. I came to realize that studs and I had no real future.

The next winter, I went looking for something a little more willing to commit. That's when I found Snowcat, the wide rim that fits on a regular bike. I outfitted him with semi-wide tires and together we hit the snow, finding more float and more opportunities than before. But there was still something missing in my life, a certain longing that was just out of reach.

The final blow came as I was pushing Snowcat over a loose, narrow trail, and watched in wonder as a cyclist passed me, riding. His bike was equipped with the same wide tires I had seen at REI. The tires of Pugsley. The next day, I told Snowcat we had to talk.

I'll admit I had my doubts, Pugsley. In a sport that cherishes sleek and thin, you were excessive and obese. You wore the purple remnants of somebody's bad '90s ecstasy trip, and even when they finally painted you gray, I could still see your skewed fork and crooked frame and offset rims — purposeful deformations just to make room for all that excess fat. But once I finally took the plunge, I was amazed at your strength and grace. You plowed over boulders like they weren't even there, then floated atop sand like you weighed an ounce. When the winter finally came, with our powder-blasting downhill rides and soft trail traverses, I knew it was love.

It's true what they say, Pugsley: Once you've had fat, you can't ever go back.

So now I just wanted to tell you that I'm so glad we met. We have a long and treacherous trail ahead of us, and I wanted to let you know that I trust you completely. You are my bike. And for better or worse, for faster or slower, in bonking and in health, I know you'll carry me through. I need you, Pugsley. Like I've never needed a bike before.