Accessibility links
Kyrgyz Town Lives with Radioactive Soviet Legacy Mailuu-Suu, Kyrgyzstan, was once an elite Soviet industrial town, where uranium was mined and processed. The mining came to a stop in the 1960s. The radioactive waste remains, and little has been done to protect the town's more than 20,000 residents. 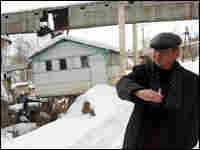 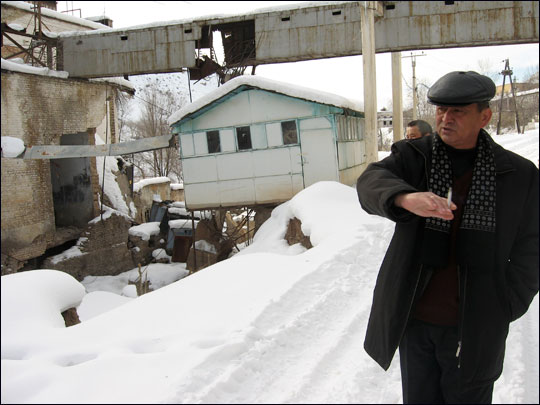 Sultanbek Eshmanbetov shows where the Mailuu-Suu River flooded and almost swept away his electric insulation factory in 2005. Environmentalists fear a repeat of the flood could force open several radioactive waste dumps nearby. 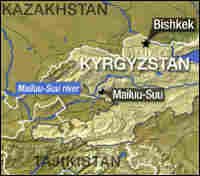 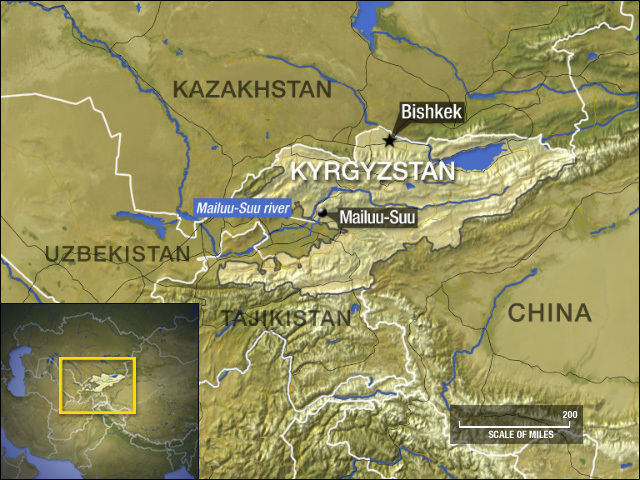 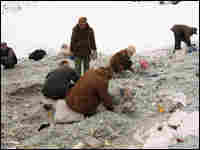 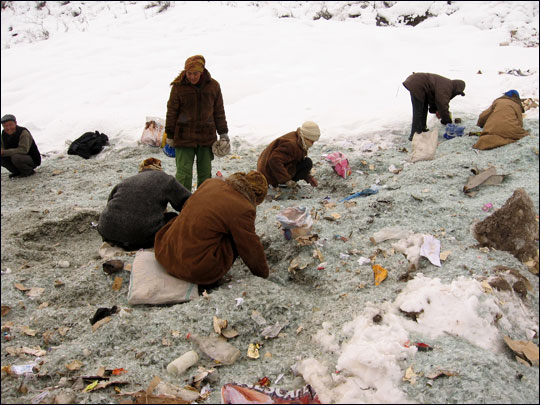 Kyrgyz women dig for scrap metal amid piles of glass from the light bulb factory in Mailuu-Suu. 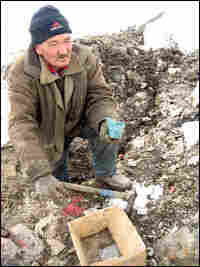 Alexander Atshanov, 54, supplements his $30-a-month salary as a bulldozer operator by digging for scrap metal in an industrial dump. The dump is just yards away from several radioactive sites. Ivan Watson, NPR hide caption 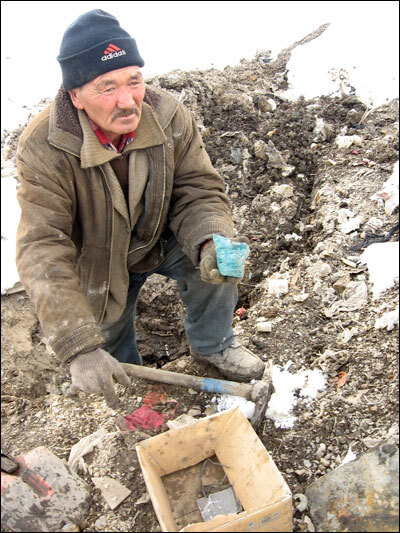 Alexander Atshanov, 54, supplements his $30-a-month salary as a bulldozer operator by digging for scrap metal in an industrial dump. The dump is just yards away from several radioactive sites. 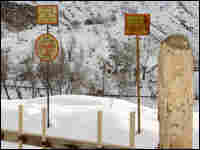 Radioactive warning signs poke out from the snow covering radioactive waste dump No. 8. There are 23 sites like this around Mailuu-Suu, and Kyrgyz officials warn their underground concrete casings are deteriorating. Ivan Watson, NPR hide caption 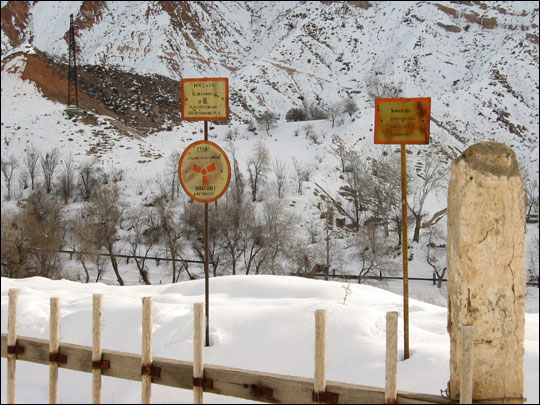 Radioactive warning signs poke out from the snow covering radioactive waste dump No. 8. There are 23 sites like this around Mailuu-Suu, and Kyrgyz officials warn their underground concrete casings are deteriorating.

Residents of the town of Mailuu-Suu in Kyrgyzstan are accustomed to living next to radioactive waste.

Some locals even joke that they need radiation to survive.

"It's in our blood. We can't breathe without it; we can't live without it," said Sultanbek Eshmanbetov, chuckling as he gave a walking tour of the snowy grounds around his electric insulation factory.

In Soviet times, the factory employed 650 people. But now, even the factory's remaining 40 employees have been without work because of power cuts that have frozen production for months.

On the tour, the factory director pointed out several plots of land, just a stone's throw away from his compound. A rusting metal sign poked out of the snow, warning of radiation.

"Here's a radioactive waste dump, there's one over there and another one over there," Eshmanbetov said. He then urged his guests to each drink 100 grams of vodka at the end of their visit to help "clean the radiation" out of their systems.

Mailuu-Suu has one of the largest concentrations of radioactive waste in all of former Soviet Central Asia, said Amanda Wooden, an environmental policy professor at Bucknell University. Last year, it was ranked one of the world's 30 most-polluted places by The Blacksmith Institute, a New York-based environmental organization.

Mailuu-Suu was once an elite Soviet industrial town, where uranium was mined and processed. The mining came to a stop in the 1960s. The radioactive waste remains to this day.

The Soviets buried some 2 million cubic meters of radioactive material under layers of concrete and gravel in 23 dumps around the town. In some places, the dumps are marked by concrete posts and waist-high barbed wire fences, which impoverished locals sometimes steal and sell for scrap metal.

"The wastes were simply left in piles, and unfortunately, right along a major water source, the Mailuu-Suu River, in a tectonically active area, in a canyon surrounded by a population, in a town that was built, in essence developed, in order to do this mining," said Wooden, who studied Mailuu-Suu when she served as an environmental field officer for the Organization for Security and Cooperation in Europe in southern Kyrgyzstan.

The Kyrgyz government has been asking for international assistance to protect the deteriorating radioactive bunkers from bursting open in the event of an earthquake or a flood.

"The radioactive waste sites are in a dangerous area that's prone to landslides," said Capt. Almabek Aidekeev of the Emergency Situations Ministry. "There is a danger that the radioactive dumps could break open and spill their contents into the water, and then disperse downstream."

In the worst-case scenario, the radioactive material could plunge into the fast-flowing Mailuu-Suu River and be carried downstream across the border to a densely populated region of Uzbekistan, less than 50 miles away, thus contaminating the water supply for more than 2 million people. In 1992, 1,000 cubic meters of radioactive waste spilled into the river when a landslide broke open one of the dumps.

The World Bank has contributed several million dollars to protect some of Mailuu-Suu's radioactive garbage.

Recently, Kyrgyz workers were hard at work in the freezing cold, attaching metal nets to the steep banks of a dry creek bed. The gulley wends between several radioactive dumps that are perched precariously on a rapidly eroding hillside. Asked whether he was worried about exposure to radiation, Aman Toktubaev looked up from the netting and answered, "We're used to it, because we've been here 30 years."

Little has been done to protect the more than 20,000 residents living in Mailuu-Suu from their radioactive neighborhood. Most of the factory jobs that first brought them to the town have disappeared following the collapse of the Soviet economy. Locals now struggle to get by, living in crumbling apartment buildings in an area where the background radiation levels are three times higher than the average in North America.

Dr. Rakhmanbek Toichuyev, a pediatrician from the Academy of Sciences in Osh, said he documented abnormally high rates of birth defects, miscarriages and stillbirths in Mailuu-Suu.

"There's a higher incidence of stomach cancer among residents who live close to the river," Toichuyev said. "In some cases, we found that people [unwittingly] used irradiated stones to build the foundations of their homes."

Much of the evidence of health problems in Mailuu-Suu is anecdotal — in part, one foreign observer says, because the Kyrgyz government has blocked the publication of reports on the town's environmental and health hazards.

"People die young here because of the radiation," said 24-year-old Misha Kassimov after working a shift at the struggling Mailuu-Suu light bulb factory, the last major source of employment in the area. "Last month, my friend died from bone cancer. ... He was 22 years old."

A Risky Source of Income

On the outskirts of Mailuu-Suu sits an entire mountain of broken glass, the product of 40 years of industrial waste dumped by the town's lightbulb factory.

The sound of tinkling glass was everywhere as dozens of locals dug through the snow to scrape through shards of glass, looking for light bulb filaments that would later be sold as scrap metal. No one paid attention to the radioactive dump sites less than 100 yards away.

Another scrap-metal hunter said he regularly drank milk to combat the effects of the radiation.

In 2006, the price of nickel jumped, and the glass landfill became a scavenger city with restaurants, tents and taxis serving as many as 5,000 scrap-metal hunters a day. Several people died during the scrap nickel boom, buried alive under mounds of broken glass. Foreign observers worried that in the scrap metal frenzy, scavengers uncovered more Soviet-era radioactive waste and leaked it out into the environment.

Amid the abandoned factories and increasingly empty apartment buildings of Mailuu-Suu stand monuments to the prosperity the town once enjoyed. Faded signs celebrate the town's 50 years as a "city of light" near statues topped with giant light bulbs. Many young residents migrate to Russia to work as laborers, leaving behind senior citizens and invalids who have no place else to go.

"This was such a good town in the old days," said Abdulaziz Nazarov, an asthmatic shopkeeper who sells eggs in an icy, outdoor bazaar. "Now, it's a dead end."