Accessibility links
Sheryl Crow, Gracefully Navigating 'Detours' Pop-rock singer-songwriter Sheryl Crow joins Terry Gross in the Fresh Air studios for an interview and live performance. Detours, her new album, is the most politically and personally outspoken record of her career. 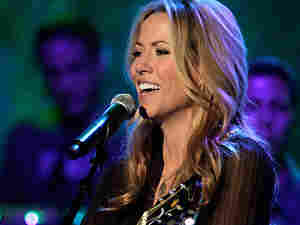 Pop-rock artist Sheryl Crow joins Terry Gross in the Fresh Air studios for a live performance and an in-depth interview about how recent events — in her personal life, as well as in the wider world — have influenced her new album, Detours.

Since her debut in 1993 with Tuesday Night Music Club, Crow has won several Grammy Awards. But in recent years, she's also battled breast cancer, adopted a baby boy and weathered a split from fiance Lance Armstrong.

And her music has increasingly focused on the issues and politics of the day. The first single from Detours, her sixth studio album, is titled "Shine Over Babylon" — which Crow describes as a tune for our troubled, complicated times, a "battle song in the face of fear."

As for the liberated "Now That You're Gone," Crow told Rolling Stone that it's dedicated to former White House advisor Karl Rove.

Crow tells Terry Gross that her cancer diagnosis and the radiation-treatment regimen taught her new ways of responding to adversity. It was "an informative time," she says, and "ultimately [it] created a huge expansion in my life."

"It's probably always been my propensity to just stay busy, instead of getting bogged down with feelings," Crow says. "I've always gone to my music for any kind of pain I ever felt. This was really an exercise in holding an emotion, and working through the pain, and not making myself busy. ... I really, really met myself every morning at 7:30, on that radiation table."