Accessibility links
Trombone Shorty Stays True to New Orleans While many musicians love the Crescent City, few choose to stay after they become successful. The New Orleans-raised Troy "Trombone Shorty" Andrews comes from a long line of brass-band greats, but is quickly coming into his own with a jazz-funk group — and plans to stay. 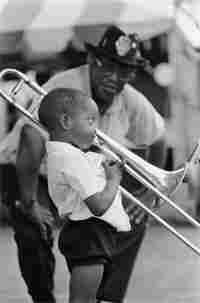 'We Gonna Make You' from Orleans Avenue's Orleans & Clairborne

'Summertime' from the Troy Andrews Quintet's The End of the Beginning 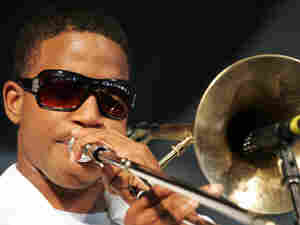 Trombonist and trumpeter Troy "Trombone Shorty" Andrews has branched out beyond jazz, working with the likes of Lenny Kravitz and U2. Sean Gardner/Getty Images hide caption

The Mardi Gras season in New Orleans hits its apex today, complete with parades, parties, and music. One of the city's most promising young horn players will spend the day on tour in Florida. But Troy Andrews is used to that. Andrews, who goes by the nickname "Trombone Shorty," has been a professional musician most his life.

Andrews grew up in the Treme, a neighborhood just across Rampart Street from the French Quarter. Few tourists venture into what one critic calls "the most musical neighborhood in America's most musical city." His grandfather was Jessie Hill, who wrote the R&B hit "Ooh Poo Pah Doo." His cousin Herlin Riley plays drums for Wynton Marsalis; he also has cousins in the Rebirth Brass Band, one of the top acts in New Orleans today. Andrews got his start playing in parades and for the tourists a few blocks away on Bourbon Street.

At 6, he started on the trombone, but as Andrews says, "I remember I really couldn't go past third position with my arm, so I had to like use my foot." Hence his nickname, "Trombone Shorty."

Not Quite "Shorty" Anymore

Today, Andrews' nickname is pretty much obsolete. He's 22 and almost six feet tall. He plays more than just the trombone, too; he's also a respected trumpeter. And his street cred extends beyond New Orleans. Last month, he made his debut at Jazz at Lincoln Center in New York.

"Part of the appeal of Trombone Shorty, when he plays either of the horns he plays, is the raw physical power and beauty of the sound he creates," Wall Street Journal and Village Voice writer Larry Blumenfeld says. "His playing has an edge from Louis Armstrong up through Dizzy Gillespie and beyond, and gains an audience's ear right away."

Like the best musicians in New Orleans, Troy Andrews moves easily among jazz, R&B, and rock. He played in Lenny Kravitz's band for a year and a half, an experience which brought him more name recognition and more money.

Today, he lives in the French Quarter, but he regularly makes the trip across Rampart Street to the Treme, a point that's not lost on people like Arthur "Town Taker" Landry, who operates T.T.'s Shoeshine Stand at the corner of Claiborne and Dumaine.

"You got some people like that up there making a dollar, they forget about where they come from," Landry says. "Not him. He always returns to where he come from."

Rent in the Treme has gone up sharply since Hurricane Katrina. The shoeshine stand in the shadow of the I-10 overpass has become a gathering place for men who don't have anywhere else to be. One of them is Andrews' father. James Andrews II goes by the nickname "Big 12" because of his fondness for gambling. He remembers hearing Troy trying to play the tuba before he could even walk.

"He was a little bitty boy," Big 12 says. "And we had all the instruments in the house. He crawled in the tuba, put his mouth to the mouthpiece, and made a big old sound out of it. And everybody thought, 'Oh, that's something.'"

Big 12 wasn't always around when his son was growing up. But Troy Andrews says that the whole neighborhood helped raise him.

Growing Up in the Treme

Andrews lived in the Treme until he was 10, when one of his older brothers was shot and killed, and his mother suffered an emotional breakdown. He went to live with the woman who was already managing his older brother, James. She had him enrolled in the New Orleans Center for Creative Arts, the same high school that helped foster the talents of the Marsalis kids, and she chaperoned him on gigs. But Andrews says that some of his friends from the neighborhood haven't been as lucky, many of them growing up on drugs or selling them.

It's not just his friends who are struggling. Many of Andrews' cousins are also talented musicians — maybe none more gifted than Glen David Andrews, a vocalist and trumpet player. But talent doesn't always translate into success in New Orleans, where drugs and alcohol are always around at parades and clubs.

While many of his cousins play traditional New Orleans brass-band music, Andrews is focusing these days on Orleans Avenue, the jazz-funk band he started in high school.

Andrews wants to reach more people, but the question is whether he'll have to leave New Orleans in order to reach a broader audience. Bob French is a veteran drummer who hired Andrews back when the name Trombone Shorty still applied.

"Tell me somebody that lives in [New Orleans] who's a major star, besides Fats Domino," French says. "Nobody. Everybody leaves. He's gonna have to leave. Wynton [Marsalis] left. Branford [Marsalis] left. Dr. John left. They love the city, but they can't live here."

But Andrews insists that he wants to live here, at least when he's not on the road. He says that the city's problems and temptations aren't going to get in his way.

"I've had a strong will power to become one of the best," Andrews says. "And I'm not gonna let nothing stop me from going to my dream."

If he succeeds, Andrews will have a city full of proud parents.