Accessibility links
What It Means to Be a California Republican A TV writer struggles with what it means to be a member of the GOP in a state known for liberals. He guides us from the "Yankee-style East Coast Republicans" of Pasadena to what he terms the "Cowboy Christian Cluster" of the Central Valley.

Listen
What It Means to Be a California Republican 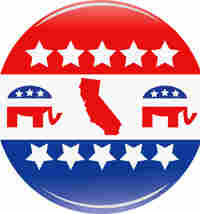 About the best thing you can say about the California Republican party is that it is not dead.

No, not dead, but it is sitting in the day room, staring out the window, waiting for the nurse to bring its meds. It's trying to remember exactly who it is. Or was.

Imagine, if you can, lifting up the eastern edge of the country into a gentle westward tilt. Maybe wiggle it back and forth to shake loose the rootless bits and tumble them all out our way. What you have, then, is California Conservatism.

And so the California Republican party is a loose — very loose — confederation of a lot of different, incompatible cultures.

In places like Pasadena, Hillsborough, Rancho Santa Fe, it's a little bit of the Yankee-style East Coast Republican establishment: Finance types, stock types, cut my capital gains taxes, eliminate the death tax, let my lesbian daughter adopt, not so much with the Jesus, and let's play polo. These are George H. W. Bush Republicans. Get-alongers and tennis players, who gaze out at the offshore oil derricks with a private pleasure they dare not name.

Sun-baked cowboy Christians cluster around San Bernadino, Bakersfield and Fresno — the Central Valley, the agricultural spine of the state where Oklahoma moved during the Dust Bowl. Where they raise a lot of cattle and lettuce and grapes and stone fruits and don't drink lattes. This is Christian bedrock country — squinty-eyed Carhart-wearing salt-of-the-earth. Reagan country. These are conservatives — not Republicans — and they'll let you know it. They're defenders of traditional values — churchgoers and Kiwanis clubbers. Suspicious of government, especially federal, especially eastern.

A little to the south they transition into Orange County Republican — the Republican Aristocrats — Nixon voters, commie-haters, there at the creation. And a little to the north and east, we start getting into off-the-grid territory — survivalist Federal Reserve-hating black helicopter scouting fringers.

What you have is a pretty diverse group of Californians all trying to align themselves with a single party. All jostling under a not-quite-big-enough tent.

In other words, what you have is trouble, all mixed together, with two-and-a-half major media markets frantically trying to beam a unifying signal across the whole bunch of them. California, they say, is the future. It's also, however, the past: shaken loose, rolled downhill, all mixed up. There's a reason our favorite dish is the salad.

You see, when you pick up the east side of the country and shake things down to California, what shakes loose are the kind of people who aren't very tethered to begin with. We all came here — whether to pan for gold or develop Facebook widgets — to enjoy a dollop of prosperous counterculture rootlessness. California's most exemplary citizens have had two things in common since 1849: blue jeans and greed.

But for the past 20 years, the party of Nixon and Reagan has drifted into fragments.

When Democratic Gov. Gray Davis was recalled a few years ago and replaced with Arnold Schwarzenegger, instead of galvanizing the state party, it revealed the cracks and fault lines up and down the state.

Schwarzenegger, you see, is a Hollywood Republican, meaning he's mellow about gays and abortion and marijuana. A lot of us out here are mellow about those things — but we're still Republicans and still, comparatively at least, conservatives. In California, it is possible to drive an electric car with your third wife for a stop at the holistic tea house run by your gay son and his husband on the way to the polling place, where you will vote for Arnold Schwarzenegger because he's a conservative, damn it, and that's what this country needs. And if you get that, you get California; if you don't, you don't.

It's not too different, actually, from the national party, which right now finds itself struggling with fissures and crisscross coalitions, with a big-spending party leader in the White House, with half the room in cowboy hats and the other half in tennis visors. In fact, the rootless, entrepreneurial California vibe seems more and more like mainstream America. People are making Facebook widgets in Chicago. They're growing grapes in Texas. California used to be made up of little pieces of America; now, America's made up of little pieces of California.

Rob Long is a TV writer and producer.