Accessibility links
Democrats: Delegate Count Uncertain New York Sen. Hillary Clinton won all but one of the large states on Super Tuesday but was not able to lock up the nomination, because nearly all of the contests were so close.

U.S. Sen. Hillary Clinton heads back to her car after casting her vote in the Democratic primary in Chappaqua, N.Y. Robyn Beck/AFP/Getty Images hide caption 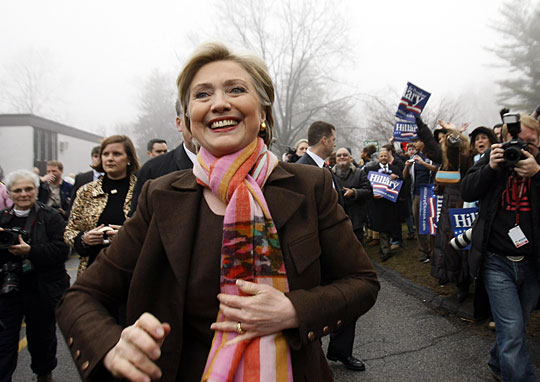 U.S. Sen. Hillary Clinton heads back to her car after casting her vote in the Democratic primary in Chappaqua, N.Y. 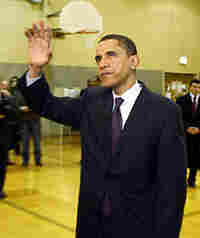 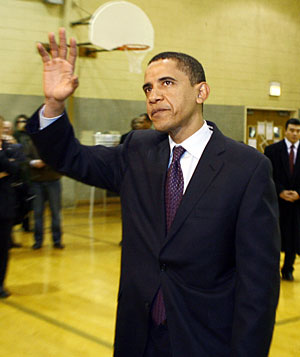 Illinois Sen. Barack Obama talks to the press after casting his vote in the Super Tuesday primary.

Sen. Hillary Clinton of New York won all but one of the large states on Super Tuesday, but her battle with Sen. Barack Obama of Illinois for the Democratic presidential nomination is far from over.

Turnout was very high. Arizona Gov. Janet Napolitano told NPR that some polling places in her state were still open more than an hour and a half after they officially closed.

Little Chance of a Clear Win

Unlike Republicans, Democrats allocate all primary delegates proportionally rather than using a winner-take-all approach, so it would have taken a landslide for Super Tuesday to have given one candidate the nomination.

That certainly did not happen.

There were 1,678 delegates at stake on Tuesday — that's more than three-quarters of the 2,026 votes needed for the nomination. The method for allocating those delegates is complicated, and how many Clinton and Obama ultimately will get is not known yet.

In California, exit polls show that white men went almost 2-1 for Obama; white women went by a smaller margin for Clinton. African Americans of both sexes went overwhelmingly for Obama; they made up about 7 percent of the voters there. Latinos of both sexes went overwhelmingly for Clinton; they made up nearly 30 percent of the voters.

Emblematic of the closeness of this election is Missouri, typically a bellwether state, which was called for Clinton several hours after the polls closed, and then put back in the too-close-to-call column a few hours later.

According to exit polls, Obama had a solid lead among African Americans in Missouri, consistent with the trend in other states.

Obama won among all voters younger than 65; Clinton easily won older voters. Obama also won among those calling themselves independents or liberals; those classifying themselves as Democrats and moderates favored Clinton.

The Democrats formally competed in four contests before Tuesday. Obama carried Iowa's caucuses — the first in the country. A few days later, Clinton won the country's first primary in New Hampshire and went on to score a second win in Nevada. The fourth contest, in South Carolina, went to Obama.

Democrats also went to the polls in Michigan and Florida, but those states' delegates have been told they will not be seated at the Democrats' nominating convention in August.

The party is punishing Michigan and Florida for holding early primaries, and the candidates had pledged not to campaign in either state. But Clinton significantly outperformed Obama in Florida after making a late bid to revive the relevance of the contest; and she won a large majority in Michigan, where her name appeared on the ballot but Obama's did not.

In the last two months, the Democratic presidential field narrowed from a crowd of contenders to two main front-runners.

John Edwards, the former senator from North Carolina and 2004 vice-presidential nominee, was the most recent candidate to drop out of the race, having failed to score a win in any of the early contests.

He did not endorse either Clinton or Obama, but in a speech last week he said both candidates pledged to him "that they will make ending poverty central to their campaign for the presidency." Poverty was a key focus of the Edwards campaign.

New Mexico Gov. Bill Richardson dropped out of the race earlier in January. He spent Sunday night watching the Super Bowl with Bill Clinton in New Mexico, but Richardson said in an interview Monday morning that he has not yet decided whether to endorse Hillary Clinton or Obama. A Richardson endorsement could potentially give either candidate a significant boost among Hispanic voters.

Despite the overall proportional allocation of delegates, deciding who gets what won't be a simple matter.

And after all the delegates are selected in the primaries and caucuses, there are still the superdelegates — officeholders and party officials who automatically get a vote at the Democratic National Convention in Denver. If it comes down to the wire with an even split at the end of the summer, their votes may be the ones that actually decide the nominee.