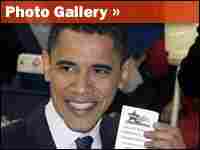 Super Tuesday is over. The presidential nominating contests are not.

MONTAGNE: Here's the short version of the results. On the Republican side, John McCain won the biggest states, like New York and California. Among Democrats, Hillary Clinton also won the big states, though Barack Obama won more states, including his home state of Illinois.

INSKEEP: NPR national political correspondent Mara Liasson is here to give us a deeper look at the results. And Mara, is there any more clarity as to who's on the way to being nominated here?

MARA LIASSON: Well, we got a little more clarity on the Republican side than we got on the Democratic side. John McCain has now solidified his frontrunner status. His results last night didn't put an end to his rivals' campaigns, as he may have hoped, but because so many of the Republican contests are winner-take-all or winner-take-most, it's going to be hard for Mitt Romney or Mike Huckabee to catch up to him.

Now, the Democratic race is a lot murkier. The Democrats hand out delegates on a proportional basis. And although Hillary Clinton won more big states last night, Barack Obama still ended up within striking distance of her in terms of pledged delegates. Here's what Hillary Clinton had to say to her supporters last night.

Senator HILLARY CLINTON (Democrat, New York, Presidential Candidate): After seven years of a president who listens only to the special interests, you're ready for a president who brings your voice, your values and your dreams to your White House.

LIASSON: Clinton called attention to one of her biggest selling points in the campaign, that she's tough and battle tested.

CLINTON: Now, we know the Republicans won't give up the White House without a fight. Well, let me be clear. I won't let anyone swift boat this country's future.

LIASSON: Each candidate got some bragging rights last night. Obama won more states overall but Clinton's states were bigger. Even before the biggest prize of all, California, had been called, Obama spoke to his supporters in Chicago.

Senator BARACK OBAMA (Democrat, Illinois, Presidential Candidate): But there is one thing on this February night that we do not need the final results to know. Our time has come.

Sen. OBAMA: Our time - our time has come, our movement is real, and change is coming to America.

INSKEEP: He also had some edgy language that seemed to be aimed at Hillary Clinton, saying we don't want to go back, by implication to the Clinton era, but want to go forward.

LIASSON: That is the message of his campaign. Here's what he said, and something he's going to be saying, in the next round of primaries...

Sen. OBAMA: We owe the American people a real choice. It's the choice between having a debate with the other party about who has the most experience in Washington, or having one about who's most likely to change Washington. Because that's a debate that we can win.

LIASSON: Exit polls show that Obama won a huge majority of the black voters and did better with white men. But Hispanic voters proved to be a very durable firewall for Clinton, particularly in California, where by more than 2-1 she won Latino voters like Ray Avila.

Mr. RAY AVILA: Hillary Clinton's more for the Hispanic people than Obama. Obama is too but not as much as Clinton. I think that campaign for Clinton is going to get the Hispanic vote.

INSKEEP: Okay, Mara Liasson, so that's the Democratic side. Let's talk a little bit more about what happened on the Republican side.

LIASSON: Well, in the Republican race John McCain was basking in his new and very unfamiliar status as the leader of the GOP field. He got twice as many delegates as his closest rival.

Senator JOHN MCCAIN (Republican, Arizona, Presidential Candidate): And although I've never minded the role of the underdog, and have relished as much as anyone come from behind wins, tonight I think we must get used to the idea that we are the Republican Party frontrunner for the nomination...

Sen. MCCAIN: And I don't really mind it one bit.

Sen. MCCAIN: He and I have been going at it pretty hard over the last few weeks, and he's a tough competitor.

Sen. MCCAIN: This election, like any election, is a rough and tumble business. We all want to win and we fight as hard as we can to do it. But I have respect for people who are willing to accept the extraordinary demands, all the ups and downs of such a tough and long contest, and Governor Romney has mine.

INSKEEP: Mara, is that customary congratulation of your opponent taking on a little greater meaning at this moment because McCain wants to unify his party and be the nominee?

LIASSON: Well, yes, he certainly wants to do all those things, although he has been, as all of the Republican candidates have been, gracious throughout and at every contest they have all congratulated their rivals.

LIASSON: Well, Romney told his supporters in Massachusetts last night that the only thing clear about the Republican race was that nothing is clear. And that appeared to be all the motivation he needed to keep on fighting.

LIASSON: Exit polls show that moderates and independents once again formed the backbone of McCain's support, showing just how much work he still has to win over his party's conservative base. Here are two McCain voters. First, Mark Chapen(ph) from New Jersey and then Alec Nating(ph) from Alabama.

Mr. MARK CHAPEN: I wanted somebody who was conservative and not religious conservative. Low - small government, open markets, that sort of thing, and low taxes.

Mr. ALEC NATING: I like his independent thought. He's not a party line guy. He's his own man. And I think he'll be a good leader.

LIASSON: Romney had hoped to be the choice of conservatives, but Mike Huckabee swept the red states South. And although the former Arkansas governor remains in third place in the delegate count, his strong showing in the South, which was his first wins since Iowa, allowed him to claim that after being written off he was alive and well. His remarks last night were a subtle swipe at Romney, who has been his chief competitor for conservative support.

Mr. MIKE HUCKABEE (Former Republican Governor, Arkansas; Presidential Candidate): Tonight we are making sure America understands that sometimes one small, smooth stone is even more effective than a whole lot of armor. And we've also seen that the widow's might has more effectiveness than all the gold in the world.

INSKEEP: Mara Liasson, in the face of those opponents, you heard John McCain last night effectively going out of his way to say, look, I am a conservative, I believe in the conservative philosophy, I'll be with you conservatives. You heard him reaching out.

LIASSON Yes, he's been doing that all along. I mean, that's been the big battle, and as matter of fact, this week he's going to try again. He's going to be working very hard to reach out to conservatives. He absolutely needs them, not necessarily to get the nomination, but if he's going to be the nominee he needs to unify the party behind him for a general election, and conservative support is crucial for that.

On Thursday here in Washington, he's going to go to the annual meeting of CPAC, the Conservative Political Action Conference. I would call that the headquarters of the anti-McCain wing of the party. He'll speak. So will Romney and Huckabee.

INSKEEP: And where will the Democrats go in the coming days?

LIASSON: Well, the Democrats still have a very even, competitive race. They're going to immediately into the next round of primaries and caucuses. Louisiana, Nebraska, Washington State all vote on Saturday. Then come Maryland, D.C., and Virginia next Tuesday. All those states are considered pretty good prospects for Obama. It's going to be a while before we get to the two states that Clinton is counting on, the very big prizes of Ohio and Texas. They vote on March 4th, but both campaigns say that they expect this to go beyond all of those contests, maybe even all the way to the convention.

INSKEEP: And you can get complete results from Super Tuesday as well as more analysis of the presidential race at NPR.org/elections.

MONTAGNE: Some of the presidential candidates paused in their speeches last night to offer condolences to victims of the storms that swept through the South. Tornadoes and thunderstorms struck several states yesterday as Super Tuesday primaries were ending. More than 45 people were killed. Pictures from the region show a trail of destruction - roofs ripped off houses, overturned cars, downed trees and power lines. Our reporters are fanning out in the region and NPR News will bring you more as we learn it.