Accessibility links
Eight Minutes of Prog-Rock and Hipster Elf Music Black Mountain's "Tyrants" opens as an exercise in '70s basement-metal nostalgia before taking a stoner's tour of several other genres, including prog-rock, hipster prog-rock (it's different), traditional folk, and the oddly mythical music of bands such as Marillion. 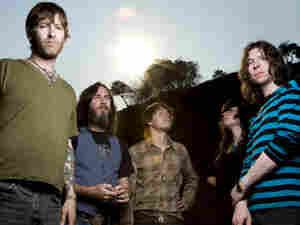 Black Mountain's members probably listened to a lot of Iron Maiden at some point during their formative musical development. And, if "Tyrants" is any indication, they may have smoked a lot of pot while they were at it.

The standout track from the Canadian indie-metal outfit's sophomore album, "Tyrants" opens as a conventional exercise in '70s basement-metal nostalgia before taking a stoner's tour of several other genres, including but not limited to: prog-rock, hipster prog-rock (it's different), traditional folk, and the mythical, Stonehenge-y elf music of bands such as Marillion. At one point, Black Mountain seems to consider stopping the song and starting over; "Tyrants" already feels every second of its roughly eight minutes, so this wouldn't have been advisable.

"Tyrants" feels dank and sludgy, quavery and, considering that it seems to be about the Iraq war, probably very serious. Black Mountain's members appear to dearly love all the hard-rock conventions they skewer and/or honor, though it's sometimes tough to tell: Are they being ironic (it's possible, given that they're indie rockers) or earnest (it's possible, given that they're Canadian)? Either way, "Tyrants" is a great, gamboling tour de force of a song — a metal track that's as ambitious as it is long.