Accessibility links
A Joyful Southern Music Parade in St. Louis The Dixie Hummingbirds came together in the '20s to sing gospel music. The Dirty Dozen Brass Band rose in the '70s to dance in the Crescent City streets. At the Sheldon Concert Hall in St. Louis, they sing, praise, and parade together.

The Dixie Hummingbirds in Concert on JazzSet 3/31/06

The Dirty Dozen Brass Band, The Dixie Hummingbirds in Concert

The Dixie Hummingbirds in Concert on JazzSet 3/31/06 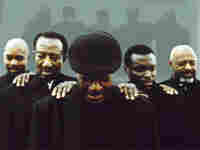 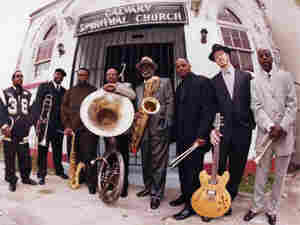 Brass bands and modern jazz experienced a mutual renaissance in New Orleans in the 1970s. Right off the bat, the new Dirty Dozen Brass Band made two revolutionary moves. First, Kirk Joseph's sousaphone playing is virtuosic; no matter how complicated the bass line, he will make you move. Second, the band picked up the tempos. The old-timers said, "You're playing too fast for a marching band," but the new generation liked to dance to it.

In New Orleans and on the road, The Dirty Dozen Brass Band is busier than ever today. It played several dates in Colorado in January, it's going to Europe in March, and on May 3, it'll play the New Orleans Jazz & Heritage Festival.

The Dixie Hummingbirds came together in South Carolina in the late 1920s. Founder James B. Davis, who had retired in 1984, died almost a year ago in 2007. Ira Tucker (Sr.) joined in 1938, when he was 13, and he's still lead singer. In the 1940s, a golden age for gospel singing, the Hummingbirds moved up to Philadelphia. Their high-energy performances inspired many imitators, including James Brown, the Godfather of Soul. In 1973, The Dixie Hummingbirds sang back-up for Paul Simon on "Loves Me Like a Rock." The group's new CD is The Last Man Standing.

This concert was originally recorded at the Sheldon Concert Hall in St. Louis, Mo., on March 31, 2006.