Accessibility links
Study: Ethanol Worse for Climate Than Gasoline Biofuels like corn ethanol have been hailed as climate-friendly fuels. But new research says that the global effects of losing agricultural land for corn ethanol production will result in twice the carbon emissions of gasoline. The finding could force major changes in the biofuels industry. 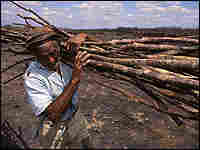 Farmland in Brazil is burned, in preparation for planting corn and beans. A new study finds that ethanol production drives such land clearing, contributing greenhouse gases to the atmosphere. Ricardo Azoury/Corbis hide caption

At first blush, biofuels such as corn ethanol and soybean diesel seem like they would be great from the standpoint of global warming. The crops soak up carbon dioxide from the atmosphere as they grow, and that balances out the carbon dioxide they produce when they're burned. But until now, nobody has fully analyzed all the ripple effects of this industry. And Tim Searchinger, a visiting scholar at Princeton University, says those effects turn out to be huge.

"The simplest explanation is that when we divert our corn or soybeans to fuel, if people around the world are going to continue to eat the same amount that they're already eating, you have to replace that food somewhere else," Searchinger says.

Searchinger and his colleagues looked globally to figure out where the new cropland is coming from, as American farmers produce fuel crops where they used to grow food. The answer is that biofuel production here is driving agriculture to expand in other parts of the world.

"That's done in a significant part by burning down forests, plowing up grasslands. That releases a great deal of carbon dioxide," Searchinger says.

In fact, Searchinger's group's study, published online by Science magazine, shows those actions end up releasing huge amounts of carbon dioxide. The study finds that over a 30-year span, biofuels end up contributing twice as much carbon dioxide to the air as that amount of gasoline would, when you add in the global effects.

Searchinger's team says these fuels are turning out to be anything but environmentally friendly. Alex Farrell at the University of California, Berkeley agrees.

"I think this paper will have major implications for the use of biofuels around the world," Farrell says.

Here in the United States, the federal government is offering large subsidies to encourage corn-based ethanol. That's a boon to Midwestern farmers and provides a domestic supply of fuel. The Bush administration is calling for a vast expansion of this industry, as part of a plan to reduce gasoline consumption by 20 percent.

"If you care about greenhouse gases," Farrell says, "then this expansion of the corn biofuel industry is going in the wrong direction."

Farrell says the new study will clearly need to be verified with similar analyses, but he says the overall conclusion looks solid. And it's not just an academic matter. Federal law says future biofuel sources will eventually need to be certified as benefiting the climate. If the new study holds up to scrutiny, America's main biofuel industry, corn-based ethanol, would flunk that test.

"Well, what is their solution?" asks Matt Hartwig, a spokesman for the Renewable Fuels Association, a trade group. He says the world needs more energy and ethanol is filling a need.

"I mean, sure, today ethanol production or renewable fuel technology itself is not perfect. But it is evolving and becoming better," Hartwig says.

But the new study concludes that even vast efficiency improvements in ethanol production won't change the equation. As long as the starting material is grown on farmland, Searchinger says, biofuels will be bad for the planet.

But Alex Farrell at Berkeley sees a way out of this. He says the focus of the biofuels industry needs a rapid change of direction, away from using cropland — which is where most U.S. biofuels come from today — and toward other sources of starting material.

"We could replace all of the ethanol that we consume in California just using waste that goes to the landfill today, and turning that into ethanol," Farrell says.

Environmentally friendly biofuels could also be made from agricultural waste or grasses grown on land that's not suitable for crops. The biofuels industry is heading in that direction, but the technology to make use of fuels other than corn and soy is still in its infancy.