Accessibility links
Army Blames 'Miscommunication' in Fort Drum Flap Army Surgeon General Eric Schoomaker says he was mistaken when he denied that the Army had told the Veterans Affairs Department not to help injured soldiers challenge their disability ratings. Schoomaker says the whole thing was a misunderstanding, and it is fine for the VA to help the soldiers.

The Army Surgeon General says he was mistaken when he denied that the Army had told the Veterans Affairs Department not to help injured soldiers challenge their disability ratings.

VA spokesmen told NPR last week that an Army team sent to Fort Drum in New York to review disability issues had told the VA office there to stop helping the soldiers, to leave that to others. Soldiers said the VA had helped them get better disability ratings, and they felt that the Army was damaging their cases by cutting off that assistance.

Army Surgeon General Eric B. Schoomaker says the whole thing was a misunderstanding, and it is fine for the VA to help the soldiers. 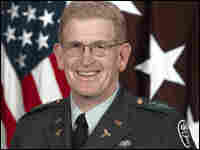 Last week, Army Surgeon General Eric Schoomaker denied that the Army told VA officials to stop counseling wounded soldiers on military disability. A memo first reported by NPR on Thursday shows that, in fact, the Army did counsel the VA to stop offering such help. Schoomaker says the controversy boils down to miscommunication. hide caption 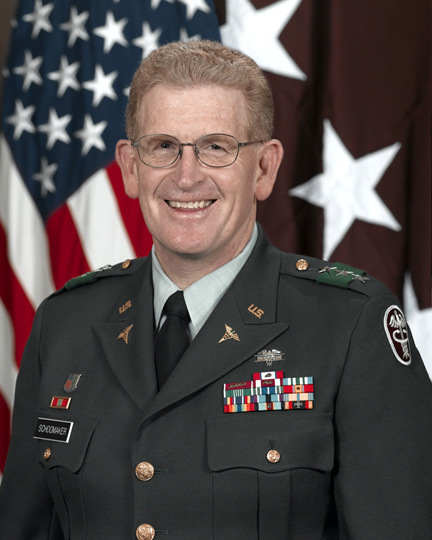 Last week, Army Surgeon General Eric Schoomaker denied that the Army told VA officials to stop counseling wounded soldiers on military disability. A memo first reported by NPR on Thursday shows that, in fact, the Army did counsel the VA to stop offering such help. Schoomaker says the controversy boils down to miscommunication.

The Army's top doctor responded on Thursday to brewing controversy over benefits for disabled soldiers at Fort Drum Army base in upstate New York. At a briefing with reporters, Army Surgeon General Eric B. Schoomaker explained why last week, he denied that Army officials told workers at the Department of Veterans Affairs at Fort Drum to stop helping injured soldiers with medical paperwork that can determine health care and disability benefits.

Earlier Thursday, NPR had first reported the details of a memo that contradicted the surgeon general's original account. The document summarizes a meeting at Fort Drum between VA workers and members of what the Army calls a "Tiger Team" — an ad-hoc group assigned to investigate, in this case, medical-disability benefits.

According to the memo, one member of the Tiger Team told the VA not to counsel soldiers on their disability benefits because "there exists a conflict of interest." Schoomaker told reporters Thursday that he apologized for his earlier, incorrect assertion that the Army surgeon general's office had not counseled VA officials on the matter.

"There obviously was some miscommunication," he said.

After the briefing, Schoomaker sat down with NPR's Ari Shapiro for an interview. A transcript of their conversation follows:

SHAPIRO: You said you were surprised to hear the stories about Fort Drum. Tell me why.

SCHOOMAKER: First of all, we got a pretty thorough report back, a summary of what that Tiger Team did when they went around to about 11 different hospitals, installations to study the comprehensive care and rehabilitation and transition into the VA, and that was not reported back as a problem or an issue. It also didn't jibe with what I knew personally about the relationship between our medical evaluation board and physical evaluation board process, the whole physical disability evaluation system and our relationship with the VA.

We have always encouraged competent counseling for our soldiers. We have no policy that denies them access to any counselor. So it just didn't make sense to me. And then when I spoke to members of the team that went up there, they had no recollection of that having been a part of their exchanges. In fact, their recollection and their re-creation of that visit up to Fort Drum was very, very positive. They were very laudatory of what the veterans benefits advisers were doing for our soldiers up there. They felt in many cases it was almost a best practice, and they came back with some recommendations for how we ought to embrace — even more thoroughly — the provision of knowledge about benefits at discharge for any soldier leaving the Army. So it just — it wasn't what I'd experienced. It wasn't what I knew from personal experience was being done within our disability evaluation process. And that was validated by the people that I spoke with.

What was so surprising was that the people you spoke with gave you an account that not only was different from the account in these documents and [from] others I've spoken with, but that almost could not have been more opposite.

A: I know. Isn't that amazing? It sort of speaks to miscommunication, doesn't it?

And so were those conversations with members of the team the basis for your statements last week that the Army did not tell the VA to stop helping soldiers with their medical disability paperwork?

Absolutely. I spoke to members who were there, present at the meetings. They had no recollection of our directing the VA one way or the other. In fact, as I said before, their recollection of the events was very, very positive. And since we don't have authority to direct the VA one way or the other, I felt pretty confident in saying to both to Army leadership, as well as members of Congress, that this wasn't how it came down. Had I had the memorandum that has later surfaced, I quickly would've recognized there was a miscommunication here. Clearly, at least one of the veterans benefits advisers in the room heard something differently, and I think that would've been a reason to immediately go back and try to correct the miscommunication or the misinformation.

Looking at the memorandum, it's pretty explicit. And reading it, it's hard to see how there can be this miscommunication. According to this memo, Col. Baker said Veterans Benefits should discontinue counseling, there was a "conflict of interest." Later in the briefing, apparently, Kevin Esslinger from the Veterans Affairs Department repeated back to Col. Baker what he'd perceived her as saying and said, "We'll discontinue this practice." This document was written the day after the meeting.

The document is dated Saturday, March 31 about the meeting that took place Friday, March 30.

A: All I can say is I wish I had seen this. I wish the team had seen this. I wish this had been shared with the team on the same day that it was written, so that we would've seen clearly what their perception of things — we've all seen experiences where different observers of the same event report it in different ways, and I think this might be one of those examples, and it's unfortunate. This is an object lesson for us all that, as we're doing things to encourage communication across these boundaries, we need to be very forthcoming about what we hear and make sure we're all in agreement.

What do you say to these people who've had less help with their paperwork because of what you've described as a misunderstanding?

A: So far — you're giving me new information, I wasn't aware that anyone has not gotten the best advice. If anyone out there feels that they didn't get the best advice, they need to come forward and let us know about that.

Some of these people have been through the disability process and finished. The ratings are done. If they had a chance to appeal — they may have or may not have — but they're now out of the Army. It's been a year since this meeting took place, and people at the VA and Fort Drum have told me that in that year, they have not offered the same advice they had been offering prior to the Tiger Team's visit.

A: This is all information I'm not privy to. I'll be happy to go back and re-look at it.

Is there anything you'd like to say to the VA team at Fort Drum now?

A: I think it was the message we tried to convey a year ago, which is, "Hey, thanks for helping our soldiers. You're doing a terrific job. We think that the practices and behaviors exhibited is among the best we've seen. We want to encourage you to continue to help us, and we're very grateful for the assistance you're providing our warriors and our families."