Accessibility links
Iraq Vets Charged with Murder of Fellow Soldier Army Spc. Kevin Shields was murdered near Fort Carson, Colo., in December after being sent home with a traumatic brain injury. The three soldiers charged with the crime all served with Shields in Iraq. 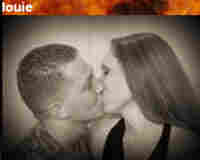 Louis Bressler, the alleged shooter in the murder of Army Spc. Kevin Shields, was sent home early from Iraq because he had been diagnosed with post-traumatic stress disorder. Bressler's attorney, Ed Farry, points to his client's page on MySpace to show that "it doesn't show any of the pathologies." When NPR looked at Bressler's MySpace page, it bore the message "Chillin an Killin" next to Bressler's photo. hide caption 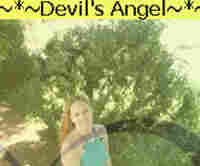 A screen shot of the MySpace page of Louis Bressler's wife, Tira, which bears the caption "Devil's Angel." hide caption 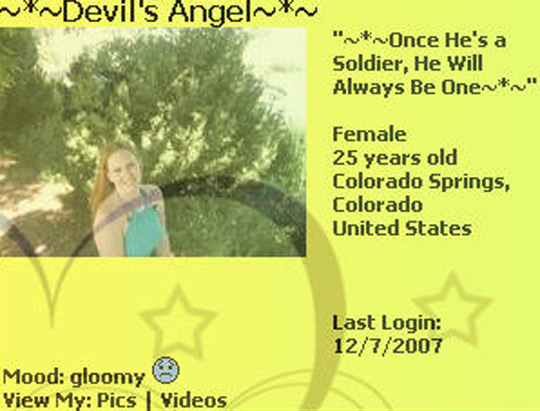 A screen shot of the MySpace page of Louis Bressler's wife, Tira, which bears the caption "Devil's Angel." 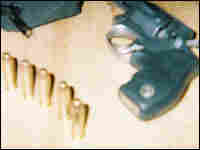 Tira Bressler's MySpace page includes a photo of a 38-caliber revolver fronted by five cartridges. A weapon like that was used to kill Kevin Shields. hide caption 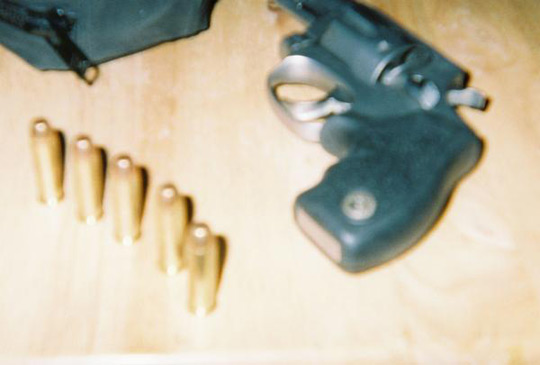 Tira Bressler's MySpace page includes a photo of a 38-caliber revolver fronted by five cartridges. A weapon like that was used to kill Kevin Shields. 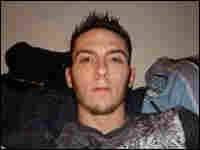 Kenneth Eastridge's MySpace page is headlined "Killin is just what I do." hide caption

Note: Pages contain language and images that some may find offensive.

A soldier who had survived two tours in Iraq and had been sent home after suffering traumatic brain injury was murdered in December in Colorado Springs near Fort Carson, Colo. Army Spc. Kevin Shields was killed, according to police, by three fellow soldiers who had served with him in Iraq.

People in Colorado Springs were shocked and puzzled. Some contend that the alleged killers were just bad apples. Others questioned whether the accused should have been allowed to join the Army in the first place. The Army said the alleged shooter had post-traumatic stress disorder, or PTSD. It is still unclear how that diagnosis will play out as the case goes to court.

Shields was out celebrating his 24th birthday the night he was shot. He had been sent home from Iraq with traumatic brain injury and was waiting for a medical discharge. His mother, Debra Pearson, lives in Roscoe, Ill., where Kevin grew up.

Pearson recalled the night she learned of her son's death. "I talked to my mom," she said, "and we had decided that at 12:30 I was going to call him with her and wish him a happy birthday. That didn't happen. At 11:15, I got the call that he'd been killed."

Shields had been shot in the face, the neck and the groin with a .38-caliber pistol. The night before, he had been out drinking in downtown Colorado Springs with three Army acquaintances, Louis Bressler, Kenneth Eastridge and Bruce Bastien.

Police quickly picked up Bastien, who began to talk. In a document filed with the court by the district attorney, Bastien said he and the other men had gotten so drunk that they had to stop the car at least twice to vomit.

According to the document, after one of those stops, Bastien said he was walking back toward the car when "he saw Louis Bressler shoot Kevin Shields. Kevin Shields immediately fell to the ground. ... Bressler then walked over to where Kevin Shields was lying and shot him four more times."

Bressler, the alleged shooter, had been sent home early from Iraq because he had been diagnosed with PTSD. He had received a medical discharge and was taking medications.

The suspects all have MySpace pages. Bressler and his wife, Tira, each have pages there, which Bressler's lawyer, Ed Farry, describe as "a kind of prototypical page by young people in America today."

"Both he and his wife discuss their adoration of each other," Farry says, adding, "It doesn't show any of the pathologies that — where certain other Web pages show — where people are contemplating bad acts."

True, Bressler and his wife do express their mutual affection on their MySpace pages. But the headline on Bressler's page reads "Chillin an Killin."

Tira Bressler's moniker is Devil's Angel, and buried in her dozens of online photos is a picture of a .38-caliber revolver with five shiny bullets in front of it. Police say Shields was killed with a revolver like that. Bressler was raised by his father in Charlotte, N.C., and did not graduate from high school.

'Killin Is Just What I Do'

Then there's Kenneth Eastridge, whose MySpace headline is "Killin is just what I do." There are plenty of pictures of his tattoos: the slogan "born to kill" and a Nazi SS insignia on one arm.

Michael De Yoanna reported on military affairs in Colorado Springs for a local paper, the Independent, and has looked at many military personnel Web pages. He says most are designed to convey reassurances to families.

"What I'm seeing here is a stark contrast," De Yoanna said. "I'm seeing violent statements and a tattoo that's hard to construe any way [but] as racist."

Such tattoos are forbidden by the military.

The AK-47 is not issued by the U.S. military, but it is commonly used by Iraqi insurgents. "This is a weapon that should have been turned over to higher commanders and stored," De Yoanna said.

Defendant Bastien told police that he saw Eastridge fire at Iraqi civilians with an AK-47 to make it seem like enemy fire. The Army's Criminal Investigative Division has investigated and so far has not been able to substantiate that charge. Eastridge earned a Purple Heart while in Iraq. His high school near Louisville, Ky., says he dropped out.

Bastien's MySpace page is kept private. He is from Fairfield, Conn., and has a wife and daughter. He returned home on personal leave from Iraq, where he was a medic, and was then held over by the Army because of a charge of domestic violence. Bastien is still on active duty.

Bastien's court-appointed lawyer, Rick Bednarski, would only say this about the case: "I think the military is sending kids over to fight a war, and then coming back and not giving them the right treatment in order to get them to relate back to real life, rather than life back in Iraq."

Shields' family finds it hard to take that Kevin survived two tours in Iraq, only to be killed by fellow soldiers on American soil. Kevin's grandfather, Ivan Shields, raised him from age 3, after Kevin's mother got involved in an abusive marriage. Like lawyer Bednarski, he says the military is mismanaging soldiers' return to civilian life.

"We just feel that the commander out there of that base don't have too good a control over these people," Ivan Shields said. "I thought they run a tighter ship than that."

Fort Carson officials say they can't comment on the case while it is under investigation.

Kevin Shields' mother, Debra Pearson, believes the problem isn't so much what happens to soldiers after they get back from Iraq, but how they got in the Army in the first place.

"I believe Bressler and Eastridge had mental problems even before they enlisted," Pearson said. "I just feel that what I know of their background, they weren't very good people before they went in. And I guess I feel that they should have been screened closer before joining."

There is no evidence that any of the three had mental problems before enlisting. Whether they should have been screened more closely before enlisting may emerge as the investigation proceeds.

PTSD has been used as an explanation, if not an excuse, in other criminal cases. But Bressler's attorney, Farry, says he won't do that.

"I'm of the opinion that the fact that he does have post-traumatic stress disorder has been used successfully by some of the co-defendants in this case," Farry said.

Farry thinks Bastien and Eastridge have fingered Bressler as the triggerman because they think a jury would believe him most likely to have committed a seemingly senseless murder.

Unfortunately, there's more to this case. Bressler and Bastien have also been charged with the murder of Pfc. Robert James. Bressler allegedly gunned James down in a parking lot as James begged not to be hurt. James was robbed of $45.

Police say the three defendants in the Shields murder case may have committed or planned other crimes as well. What may be argued out in court is whether this is just a group of thugs who shouldn't have been in the Army in the first place, or a group unable or unwilling to put aside the mindset they forged in combat.