Accessibility links
A Busybody's Guide to Improving the World After witnessing the violent self-destruction of a neighborhood family when she was a teen, Brigid Brockway decided she would never be complacent again. Today, she believes that sticking her nose into other people's business is an act of compassion.

Listen
A Busybody's Guide to Improving the World 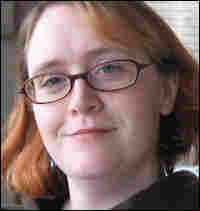 Brigid Daull Brockway lives with her husband in Canton, Ohio. Before she became a technical writer for a company that makes computer systems for car washes, Brockway worked in group homes for children and adults with mental illnesses. Photo Courtesy of Brigid Brockway hide caption

I believe in sticking my nose into other people's business.

When I was a teenager, a man I knew killed his son and himself. On the TV news the neighbors were shocked that something like this would happen here, and they had no idea the family was in such trouble.

It was a lie. We all knew what that man did to his kids. We told ourselves it was none of our business, and now we were lying because we were complicit in a child's death. We'd seen the bruises on the children and did nothing. We'd seen the way he talked to them and said nothing. And so when the TV cameras came along, we told them we saw nothing.

I helped kill that kid, like everyone else, in the name of minding my own business.

Martin Luther King Jr. said, "Injustice anywhere is a threat to justice everywhere." I'm no Martin Luther King, but his call to action is as relevant now as it was then, and I know that the only way I can atone for that child's death is to butt in, even when it's unpopular, even when I'm not in the mood to fill out a police report or get screamed down by an abusive parent in the grocery store.

I've done those things, but I used to do them a lot more when I lived in the rough neighborhoods where I grew up, and when I worked at tough jobs. There was a wrong to be righted or a person to help around every corner. But then, I got a regular job. Now I live in the suburbs and work in a cubicle, and there are no great moral decisions under my nose.

The other day, I finally got around to reading the stack of bulk mail from charities that has been piling on the kitchen table. I was confronted with countless organizations wanting me to help children who are victims of war, neglect and abuse around the world — all of it seemed so overwhelming. And it made me want to do nothing more than just sit on the couch and watch reality TV.

But Dr. King's words keep ringing back to me. As much as I may dislike my role as busybody, I think I'm really not nosey enough. I'm worried about saving the kids up the block, but what about kids around the world whose lives are in danger because I'm not sticking my nose in their business?

I know it's time to get off the couch and start butting in more. It begins with writing this essay and with holding myself accountable to my ideals. I believe it's time I started sticking my nose not just in the business of my neighbors, but in the business of the world. I'm not eager to be chastised for my nosiness, but I know a little boy who died because no one likes a busybody. I believe I've got no right to make others suffer for my lack of conviction.