Accessibility links
Mendelssohn's 'Wedding March' at 150 With its regal blast of trumpets and its hummable tune, Felix Mendelssohn's popular "Wedding March" experienced its first taste of wedding fame at the nuptials of princess Victoria Adelaide Mary Louise 150 years ago. 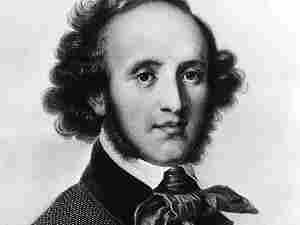 It's hard to imagine wedding music without the familiar strains of Mendelssohn's famous "Wedding March." The tune is so famous — opening with its regal blast of brass — that it seems like it's been around forever. But it was 150 years ago that the Wedding March was popularized for the first time.

The March was first performed in Potsdam in 1842, as a part of Mendelssohn's incidental music for the Shakespeare play A Midsummer Night's Dream. It wasn't until Jan. 25, 1858, that the march first appeared in a royal wedding — as a recessional used by princess Victoria Adelaide Mary Louise, the oldest child of Queen Victoria, when she married Frederick William IV of Prussia.

Classical-music historian Robert Greenberg says that the event was enough to set a standard for ages to come.

"When a royal person does something royal-sounding, everyone wants a piece of the action. And from that moment on, Mendelssohn's "Wedding March" from A Midsummer Night's Dream has become a staple in weddings in the German- and English-speaking worlds."

But Greenberg says that Mendelssohn had Shakespeare in mind long before he penned the famous march.

"At the age of 17, he got it in his head to write an orchestral work that would illustrate the characters of his favorite play," Greenberg says. This is the piece that's called the "Overture" to A Midsummer Night's Dream, and it's one of the masterworks of 19th-century orchestral literature.

Going back even further, between the ages of 12 and 14, Mendelssohn composed 12 string symphonies, four operas, and many other works. Greenberg says that Mendelssohn's precociousness was due in large part to his privileged lifestyle.

"He came from a wealthy banking family in Berlin, and his parents wanted only the best for their children," Greenberg says. "They were over-educated by any standards. Mendelssohn could speak multiple languages as a child, reading Homer in the original by the time he was 10. He was also an excellent water-colorist. Music was just another one of those things he mastered as a young man."

It also didn't hurt that the young composer's father hired private orchestras so Mendelssohn could learn on the job, hearing his own music as he composed it.

Mendelssohn wrote his first symphony for full orchestra at age 15. His first acknowledged masterwork came one year later, in the form of an octet for strings.

Greenberg says much of its genius is to be found in the way the piece is built.

"The themes and how he manipulates them are brilliant," he says, "especially in the third movement 'scherzo,' which has a lightness, an effervescence that we now refer to as 'Mendelssonian.' It's a kind of music that no one had written before."

Mendelssohn was also innovative as a conductor, particularly after he took over the prestigious Leipzig Gewandhaus Orchestra.

"He became the prototype for the modern conductor," Greenberg says. "He was the first to use a baton on a regular basis. He programmed music back to the 16th century, something new at the time. And he created an infrastructure that made the life for his musicians easier. He got them pensions and dental plans, creating a loyalty within an orchestral core that was used to being treated like cattle."

Unfortunately, Mendelssohn was only 38 years old when he died in 1847. He suffered a series of strokes almost immediately upon hearing of the death of his beloved sister, Fanny.