Accessibility links
Clinton Seeks to Cast Herself as Underdog Although Sen. Hillary Clinton collected slightly more delegates than Sen. Barack Obama in the Democrats' Super Tuesday contests, her presidential campaign spent the rest of the week repositioning her as an underdog. It all has to do with who her contributors are.

Listen
Clinton Seeks to Cast Herself as Underdog 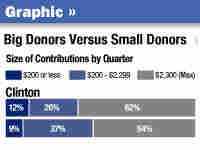 Campaign Cash: See Who Is Giving to Clinton and Obama

The presidential candidates file their January financial data at the Federal Election Commission on Feb. 20. Till then, read an overview of their money outlook.

Although New York Sen. Hillary Clinton won the largest states and collected slightly more delegates than Illinois Sen. Barack Obama in the Democrats' Super Tuesday primaries and caucuses on Feb. 5, her presidential campaign spent the rest of the week repositioning her as a kind of underdog. It all has to do with her campaign money, and who's contributing to her.

This repositioning comes down to one word, and in this campaign cycle, it's not a nice one: "establishment."

This week, Clinton and her advisers declared that Obama is the "establishment" candidate. When chief strategist Mark Penn explained the Feb. 5 Super Tuesday results to reporters Wednesday, he said, "We went through 10 days of wall-to-wall coverage of Sen. Obama and his establishment campaign, of big endorsements, money, ads on the Super Bowl. And Hillary Clinton again bounced back."

And the candidate herself said of Obama's Super Tuesday performance, "Well, he sure had a lot of establishment support yesterday, and I feel very good about the results."

All this came as Clinton revealed she had lent her campaign $5 million in late January. The loan came at a time when Obama had already been able to buy TV time for the Feb. 5 contests.

Campaign chairman Terry McAuliffe said Thursday that the loan wasn't a sign of weakness, but rather was inspiring to legions of small donors. He got the message across to reporters by letting them listen in on a conference call with the campaign's biggest money raisers, or bundlers.

"We need your help," he told the fundraisers at the end of the call. "People are stepping up to the plate. Hillary Clinton has stepped up for us. And now we need to step up for her."

It's hard to exaggerate the distance between Clinton's previous image and her new underdog image.

McAuliffe for decades has been a fixture of the Washington Democratic power structure. When Clinton announced her candidacy, much of that power structure promptly lined up behind her. Her money network has concentrated on donors who could give the maximum $2,300. Such contributions accounted for fully half of her money last year, according to an analysis by the Campaign Finance Institute.

This big-dollar fundraising is more efficient at first. But maxed-out donors can't give anymore later. So one of Clinton's chief money raisers, private equity financier Alan Patricof, gave this advice on the conference call:

"The easy collections are from people who've given something already and have not gone to the maximum of $2,300," he told the other bundlers. "That's where I personally have had the most success.... Rather than even starting with new people, there are so many people out there who gave partial amounts that you can go back to now."

Clinton's financial problems reflect one of the ways in which the Internet has changed the rules of the fundraising game. Tony Corrado, a political scientist at Colby College, says raising money online is cheaper. It also takes virtually none of the candidate's time. And it's richly symbolic, as close connections to big donors can become a political liability.

"It's now being seen in terms of whether a candidate is really tapping into the grassroots voter," Corrado says, "or whether they're relying on the same old power players and the money game."

Corrado notes that last month, Obama raised $32 million — $28 million of it online. Between Super Tuesday and the end of the week, another $7.5 million came in over the Internet. Clinton raised $13.5 million from all sources in January. That gap is perceived as a symbol of popular support for Obama.

Corrado says the Clinton campaign is now "trying to put more emphasis into online fundraising as way to show that they, too, have lots of loyal supporters out there and that they are also enjoying success with smaller donors."

The Clinton campaign says it has raised more than $6.4 million online this week. The campaign says that's enough to stay competitive on TV for upcoming primaries, and enough to change the candidate's image as well.