Accessibility links
Collaborations Highlight Grammys 50-Year History On the eve of this year's Grammy Awards, the 50th anniversary of the show, Grammys producer Ken Ehrlich talks about highlights of his years of bringing together artists from across the music spectrum.

On the eve of this year's Grammy Awards, the 50th anniversary of the show, Grammys producer Ken Ehrlich talks with Scott Simon about highlights of bringing together artists from across the music spectrum over the decades. Ehrlich has published a new book about his experiences, At the Grammys: Behind the Scenes at Music's Biggest Night.

At 50, The Grammys Show Their Age Again

At 50, The Grammys Show Their Age Again

Record of the Year

Album Of The Year 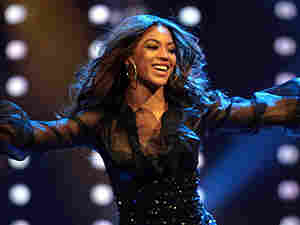 R&B singer Beyonce performs in Duesseldorf, Germany, in 2007. In addition to being nominated for Record of the Year, Beyonce is scheduled to present an award. Volker Hartmann/AFP/Getty Images hide caption

Over the years, voters for the Grammy Awards have been widely ridiculed for choices that make them seem out of touch with popular music.

Those who decide the winners say the picks have gotten better. But as the awards approach their 50th anniversary this Sunday, change may have come too late.

The Grammys started out as the music industry's answer to the Oscars. It was 1958, and rock 'n' roll was tearing up the charts. But at clubby awards banquets in New York and Beverly Hills, Grammy voters awarded album of the year to... Henry Mancini.

Los Angeles Times blogger Tom O'Neil wrote a book about the Grammys. He notes that it would be 10 years before a rock record won Album of the Year, though the Grammys did add a separate category for rock 'n' roll — in 1970.

"There was an outright conspiracy in those early Grammy years not to reward rock 'n' roll," O'Neil says. "Remember who the Grammys are: They're the industry establishment. They're going to punish the hooligans at the door, and try to keep them out."

And a lot of young fans noticed — including Sasha Frere-Jones, pop-music critic for The New Yorker. "They were corny," he says. "As a kid, I just got the impression that they didn't know what music was out there. And the show itself was just so lame."

The Grammy for Record of the Year in 1971 — the first year the awards were broadcast live on TV — went to Simon and Garfunkel for "Bridge Over Troubled Water." It was a reasonable choice, in hindsight.

But the members of the Recording Academy, who vote on the Grammys, have made some stunningly questionable decisions over the years — and not just the notorious Best New Artist Grammy they gave to the lip-sync act Milli Vanilli. The academy has never given a Grammy to Neil Young, The Who, Led Zeppelin, or The Kinks.

"Undoubtedly, there'd be oversights, and there'd be lessons learned. And I think they have been," says Neil Portnow, CEO of the Recording Academy. "What we've tried to do is to make sure that we have a well-established, very broad-based, inclusive, and savvy voting population. These are peers of those being considered."

Those voters are peers in the sense that they work in the music industry. But there are more than 12,000 voting members, who can cast ballots in a number of different categories. That's a key difference between the Grammys and the Oscars, where directors nominate directors, screenwriters nominate screenwriters, and so on.

There are also fewer Oscars up for grabs. This year, the Grammys will hand out awards in 110 separate categories, from Record of the Year to Best Hawaiian Music Album.

Despite their stumbles, Portnow says the Grammys remain the most coveted award in the business.

"You will always hear a musical artist who's either been nominated or received a Grammy as 'Grammy-nominated' or 'Grammy-winning,'" Portnow says. "Even following to the unfortunate time when there's a passing and an obituary. It's 'Grammy-winning artist so-and-so passed away.'"

But that may have as much to do with journalists needing an easy way to identify an artist as it does with the Grammys themselves. Awards like the Pulitzers and the Oscars are actively coveted in their fields. But three-time Grammy-winner Maynard James Keenan of the rock band Tool says the Grammy just doesn't have the same cachet.

"It does give you a little pat on the back," Keenan says. "But I just don't think that musicians are adjusting their agenda. They just do what they're going to do — unlike the Oscars, where a studio will hone a film to get that Oscar."

When a movie wins the Academy Award for Best Picture, it can be worth tens of millions of dollars to the studio that released it. The bounce from winning a Grammy is generally much smaller.

The Dixie Chicks' members saw their album Taking the Long Way jump from #72 to #8 on the Billboard charts the week after they dominated last year's awards. But that kind of impact is rare. And it may be the last time the Grammys will have such a dramatic effect. Total album sales dropped 15 percent last year, continuing a slide that started seven years ago.

Frere-Jones notes that more people are getting music for free online, either through streaming services or from unauthorized file-sharing. He says the Grammys are behind the curve once again, recognizing artists who sold a lot of CDs in 2007, while overlooking one of the most downloaded songs of the year: "Crank That" by Soulja Boy, who did not get nominated in any of the top four categories.

Portnow insists that the Grammy Awards have survived other changes in how music reaches the consumer.

"Whether it was something on a vinyl disc, cassette, 8-track — all of these things change," Portnow says. "But it doesn't have a tremendous impact on what we do. In terms of our recognition of great music, that doesn't change much for us."

But 50 years on, the music industry may be changing so much that the Grammys won't have much choice but to pay attention.