Accessibility links
Lost, Artfully, in Israel: 'The Band's Visit' Sweet-natured and sharply pointed, The Band's Visit follows the adventures of an Egyptian musical group meant to be on a goodwill tour in Israel. Through a mishap, the band is stranded in a remote desert town.

Sweet-natured and sharply pointed, The Band's Visit follows the adventures of an Egyptian musical group meant to be on a goodwill tour in Israel. Through a mishap, the band is stranded in a remote desert town.

A new film from Israel is called "The Band's Visit." It's making news for not getting an Oscar nomination as Best Foreign Film. It was disqualified because it had too much English in the dialogue.

L.A. Times and MORNING EDITION film critic Kenneth Turan says the film was so good, it's likely it would've won.

KENNETH TURAN: "The Band's Visit" doesn't do the expected. It's a film from Israel that delivers much of its dialogue in English. It's sweet-natured and sharply pointed. The heroes are a group of Egyptians, the eight members of the Alexandria police ceremonial orchestra. They've been invited to play at an Arab cultural center in Israel. No one, however, has thought to meet them at the airport.

A language mix-up gets the band sent by mistake to a tiny town in the desert. When the Egyptians wander up to a deserted snack bar dressed in their elaborate police uniforms, a slacker local yells inside for the proprietor. Hey, Dina, some general wants to talk to you. It's Dina who tells Tawfiq, the band's reserved leader exactly what's what.

(Soundbite of movie, "The Band's Visit")

Ms. RONIT ELKABETZ (As Dina): There is no (unintelligible) here.

Ms. ELKABETZ: No. No concert, no (unintelligible), no concert at all.

TURAN: No buses available to take the Egyptians to the correct town until the next day. So the band is forced to spend the night in this great, wrong place.

English is the only thing the Egyptians and the Israelis have in common, including an unexpected version of a George Gershwin classic.

(Soundbite of movie, "The Band's Visit")

TURAN: Dina and Tawfiq are the film's odd couple, with a whiskey voice and a been-around stance, Dina is nobody's fool. But she's clearly intrigued by Tawfiq's courtly formality, so different from the loudishness of her surroundings.

Nothing cataclysmic happens during the band's visit to this god-forsaken Israeli hamlet, but by the time the visit is over, people have been genuinely touched by their gently eccentric experiences. And, to our surprise, we have as well. 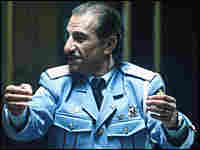 Tewfiq (Sasson Gabai) is an Egyptian police band leader lost in Israel after a miscommunication about the opening of an Arab Culture Center in The Band's Visit. Sony Pictures Classics hide caption 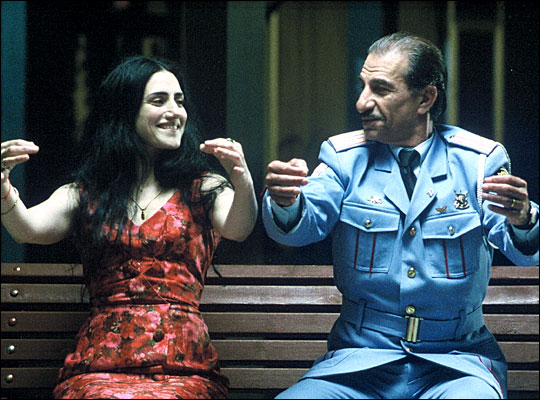 Tewfiq (Sasson Gabai), an Egyptian police band leader lost in Israel and Dina (Ronit Elkabetz) befriend one another in a park in The Band's Visit.

An Egyptian police band arrives in Israel for a good will visit, attired in powder-blue uniforms that make them look like refugees from a child's toy chest. When their sponsors don't meet them at the airport, they board the wrong bus, and end up stranded in a remote desert town, far from their destination. The proprietor of a local diner helps settle them with local families for the night, with the fit proving haphazard at best, awkward at worst.

And from this intersection of the haphazard and the awkward, armed with gentle humor and serious understatement, Israeli writer-director Eran Kolirin makes a nifty little human comedy. Communication being difficult — the only language the Egyptians and the Israelis share is English, and none of them speaks that well — some scenes are very nearly mimed. There's a lovely bit where the band's ladies' man tries wordlessly to help a skittish, inexperienced Israeli woo a painfully shy young woman — a scene as delicate and sweet as something out of Chaplin.