Accessibility links
A Classical Treasure Trove at YouTube Legendary musicians such as Arturo Toscanini, Maria Callas and Jascha Heifetz might be gone, but their performances are still alive, thanks to YouTube. Commentator Miles Hoffman considers the popular Web site a treasure trove for fans of classical music.

John McCormack sings 'I Hear You Calling Me'

YouTube has evolved into much more than a web destination for home videos of cats playing the piano. Commentator Miles Hoffman says the popular video site has turned into something of a treasure trove for lovers of classical music--grainy newsreels, clips from old movies, the sound and sight of virtuosos of every stripe. 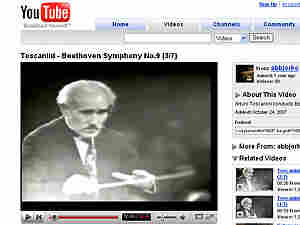 Miles Hoffman says YouTube is a great place to see performances by legendary musicians of the past, such as conductor Arturo Toscanini. Courtesy of YouTube hide caption

Hoffman has been pointing and clicking his way through various classical-music offerings on YouTube. He's particularly taken with clips of Arturo Toscanini conducting the NBC Symphony Orchestra in Beethoven's 9th Symphony from 1948.

"What's interesting to me is the economy of motion," Hoffman says. "I think this would be interesting for young conductors to see, that in a performance you don't have to go into wild gyrations. Toscanini's motions are very compact; it's almost as if he's keeping track of things they've already worked out. He doesn't have to put on a big show."

As a musician and a teacher, Hoffman says his YouTube interest is also piqued from an educational standpoint.

"What I realize from talking to students all over the country is that there are so many great artists that they have not only never seen, but never even heard of. I think it would be a wonderful idea for educators all over the country to make lists of suggested YouTube links for their students, so that they can be exposed to great performances of great music."

One of Hoffman's YouTube favorites is a duet from Bizet's opera The Pearl Fishers featuring tenor Jussi Bjorling and baritone Robert Merrill. Hoffman says that clicking from one great performance to another, it's easy to let a few hours slip by. More than occasionally, there are some real surprises--such as a duet between the king of soul, James Brown, and the king of the high Cs, Luciano Pavarotti.

"It's not Jussi Bjorling and Robert Merrill," Hoffman says. "But even that has its appeal."