Accessibility links
On 'River,' Hancock Skates Away with Grammy Last night, the Album of the Year Grammy went to an underdog — Herbie Hancock's River: The Joni Letters. Though the Joni Mitchell tribute doesn't rank among Hancock's best work, Tom Moon says that for those who know the pianist, the unlikely honor isn't really so unlikely.

Listen
On 'River,' Hancock Skates Away with Grammy 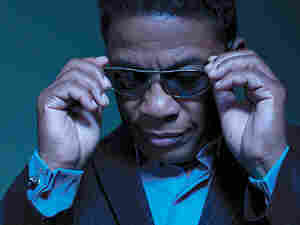 Last night, the Album of the Year Grammy went to an underdog. Herbie Hancock's River: The Joni Letters is only the second time a jazz album has received the big award — the last one was Stan Getz's Getz/Gilberto, 43 years ago. But for those who know the pianist, who has made thoughtful contributions to jazz in each decade since the 1960s, the unlikely honor isn't really so unlikely.

For much of his storied career, Hancock has explored jazz, funk, hip-hop and all sorts of pop with renegade fearlessness. So it wasn't exactly a surprise when he decided to take on the Joni Mitchell songbook. With help from a mighty band and big-name stars including Norah Jones, Tina Turner, and Leonard Cohen, Hancock set out to reframe Mitchell's confessional songs — cornerstones of singer-songwriter music — in a jazz context.

From a distance, River looks like another of those tribute projects that have become a depressing fixture of recent jazz. But Hancock is too smart to follow the tribute-record script. He doesn't radically overhaul Mitchell's songs — instead, he gently opens them up and lures the singers into fascinating free-associative conversations.

It's like there are two stories being told in these songs. One in Mitchell's words, alongside a secondary narrative being told between Hancock and his longtime collaborator, the amazing saxophonist Wayne Shorter.

This isn't a great jazz album from start to finish, especially compared with the towering LPs Hancock made for Blue Note in the 1960s. That's why it's strange to see it win the Album of the Year prize. As Hancock noted, it is completely different from what's happening in pop music these days.

But who knows why it won? Maybe the Recording Academy is finally suffering from diva fatigue. Or maybe this time the music won out. Because the interactions on River are more thoughtful and spontaneous than most of what crossed the stage on music's biggest night.