Accessibility links
'Made in America,' from Coast to Coast Over an 18-month period, Joan Tower's Made in America was heard in all 50 states, played by 65 different orchestras. Her composition, conducted by Leonard Slatkin, has now netted three Grammy awards.

The composer of 'Made in America' talks with 'Performance Today' host Fred Child. 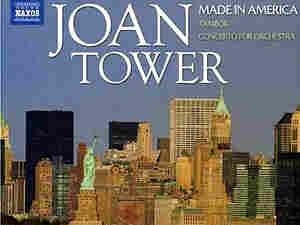 The making of Tower's Made in America is an old-fashioned story of American ingenuity.

In 2001, leaders of a few small-budget symphony orchestras around the country gathered to commission a new piece of music from a nationally known composer. For any one of those orchestras to commission a piece on its own would have been cost-prohibitive. But as a consortium, they were able to approach Tower, recognized as one of the most successful composers in the country.

With the backing from organizations including the American Symphony Orchestra League and the Ford Motor Company Fund, interest grew and the consortium ballooned to 65 orchestras from all 50 states. Over the course of a year and a half, each of the orchestras got a chance to perform Tower's new work.

As a composer, Tower was keenly aware that the piece would be performed by a wide variety of orchestras, varying in quality. In a 2005 NPR interview, she said she relied on advisers who were both players and conductors.

"They told me, 'That's too fast, that's too high, don't feature that instrument.' I wanted the lowest level of these orchestras to play this piece." But Tower also knew that she had to compose a very strong piece that would merit a lot of repetition.

"When they asked me to do this," Tower said, "they called the project Made in America, and the fact that it was going across the U.S., this word 'America' kept popping up in my brain. Also, the tune 'America the Beautiful' started to come in, and I thought, 'I really love this tune. It's a beautiful tune, and I think I'll start with this.'"

The piece opens slowly, with the famous melody delicately unfolding in the winds. Tower says it keeps resurfacing in different guises.

"The theme is challenged by other aggressive and dissonant ideas that keep interrupting, interjecting, and unsettling it," she says.

Made in America received its premiere by the Glen Falls Symphony Orchestra in New York State in October 2005. Forty-nine states later, the piece was heard in Alaska, performed by the Juneau Symphony in June 2007.