Accessibility links
In from the Cold with White Hinterland Singer-songwriter Casey Dienel talks about making the transition from solo artist to bandleader, struggling with nerves as a performer, and watching people disassemble a giant whale that had washed up on the beach near her hometown.

Listen
In from the Cold with White Hinterland

Singer-songwriter Casey Dienel talks about making the transition from solo artist to bandleader, struggling with nerves as a performer, and watching people disassemble a giant whale that had washed up on the beach near her hometown. 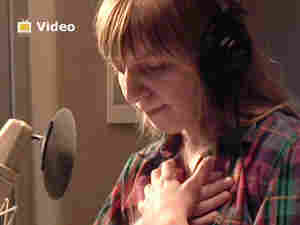 The young Massachusetts breed singer-song Casey Dienel released her first album called "Wind-Up Canary" under the name Casey Dienel. It was a solo affair, and its slightly offbeat, quietly observant songs, sought the attention of a few taste-making blogs. So it was a bit of a surprise that when it came time to record album number two, she decided to go a different route. The songs are still written by Casey, but under the name, on the front of the album, White Hinterland. Dienel visited the BPP studios last week. And when she came, she brought with her a giant old Fender Rhodes keyboard and a couple of friends from her conservatory days to back her up on violin and glockenspiel. She talks about her new record, called "Phylactery Factory," which turns out to be personal, in some surprising ways, along with her decision to stop recording under her own name.

So Casey, so fans of your solo work, "Wind-Up Canary," when you go on to the White Hinterland Web site, there's this little message that says, for the present and foreseeable future, there won't be anymore Casey Dienel unless you run into her ordering coffee or seeing a friend's show.

STEWART: It's so dramatic.

Ms. CASEY DIENEL (Singer, Songwriter): Oh, I didn't mean it to be so drastic in any way. I just feel like there's no other way to say it other than to be completely blunt about it. So it was very exciting to me, actually, writing that little passage on my Web site. It felt very liberating.

And also, I love playing in an ensemble. I have three of my close friends playing with me, and I have, you know, friends all over that sometimes will stop in and play sets. And I get a lot more joy out of the kind of the visceral of sharing of music in a live setting than I do playing alone. I don't really feel like the maestro, you know? It doesn't really suit me. I think I' more collaborative.

STEWART: Now, you wrote most of the songs, or all the songs for…

Ms. DIENEL: All the songs, yes.

STEWART: …let me see if I could say your name right, "Phylactery Factory?"

STEWART: All right. One thing about your songs I noticed is their observational, and they tell stories.

STEWART: But they're not necessarily stories about you and your life and really personal.

Ms. DIENEL: Well, they are very personal. I think I just have a very vivid way of describing, you know, dreams I have or experiences that I've had or - you know, I can be writing about three things at once, but describing it as one thing. And it's very kaleidoscopic for me when I - not just songwriting, but life in general. I think I experience it in a kind of a three-dimensional way. And I think that, you know, easily incorporates itself into my writing.

STEWART: So, when I'm hearing a song about an art deco house and a crushed bathtub…

STEWART: …that relates to your personal life somehow?

Ms. DIENEL: It really does. I mean, it's a house that I grew up with, and it was this really funky white house. (unintelligible) the funky white house, and this big, kind of garish house that someone had built for their own creative designs and just so ugly that there is something kind of beautiful about it. And so it was knocked over and it was really sad, you know. And it's not my house, but it's someone's house. And I see a lot of that in the town where I grew up. There's a lot of development. And not that this song is about development necessarily. But, you know, I think I bring in touch stones of my life into the songs. But I wouldn't say that they're very confessional, either. I would shy away from saying they're strictly autobiographical. But…

STEWART: Well, let's hear you first song. Tell us what you're going to play.

STEWART: And tell us who he is.

Ms. DIENEL: Oh, he is actually my friend Max Haft, who's playing violin.

STEWART: We're speaking with Casey Dienel of White Hinterland. And your new album is called "Phylactery Factory." And I'm going to spell Phylactery, here, for who people who are what? How?

STEWART: All right, here we go: P-H-Y-L-A-C—T-E-R-Y. And either means - I looked it up - some sore of amulet to prevent harm, or it's case rare relics of the dead or held, or a small box holding Jewish scripture that's sometimes worn by devoted Jews during prayers. So I'm curious which one of the three is that in the title of your CD?

Ms. DIENEL: Well, it's actually - for me, it was the simplest meaning, which is a reminder. I think all the songs have reminders in them and things that are very - things that you can either hold close or kind of depend on and - or put blame on, whatever it is. Like a phylactery is just basically something that you transferred meaning to, like, you know, just a symbol. But I had it from a dream. I had a dream. I'd never heard the word. So whenever someone says I don't know how to spell it, I totally understand, because I'd never heard the word and it came to me in like a dream I had. For four days I was dreaming of the sound P-H.

Ms. DIENEL: And I would wake up in the morning going, like, what is that?

Ms. DIENEL: I have a very active dream life, and then that word came up and I immediately ran from my bed and looked it up and I thought, oh, this is perfect. This is exactly the word I've been looking for the album. Just, you know, instant.

STEWART: The sound of your voice, your speaking voice and your singing voice is quite intimate. You know you lean in and you listen. So I'm wondering what kind of venues do you prefer to perform in? Is smaller better for you, or do you have sort of a thoughts in your head about Radio City Music Hall has beautiful acoustics?

Ms. DIENEL: I love, I mean, I love any place that has wonderful sound. We've played in a lot of churches, and that seems to go really well. Just the acoustics of the church, you know, they're built for a lot of people that normal don't sing, to sing together. So I think the acoustics carry my voice very well and all the instruments that I end up playing with.

STEWART: Well, let's hear another song from your new album, "Phylactery Factory." This is "A Beast Washed Ashore." What's this about?

Ms. DIENEL: I grew up in a small town on the coast of New England, and there were days where, you know, like a big whale would wash up the shore. It sounds comical. And those huge whales, like a humpback whale would wash ashore and we would all skip school and go watch them disassemble the whale. It's pretty grizzly, but it's very amazing. I mean, that pelvis of a humpback whale, it takes about like two trailer tractors - or tractor trailers - to move it, and it's just this behemoth, but it's still in front of you. It's moving, and there's people that would come and they would like bring a picnic lunch and watch them. I know, I know. You're making a face because it disgusting.

But it is, I mean, it's amazing, and there's a lot stuff when you live in the towns like that. You know, it's kind of special.

STEWART: Casey Dienel and her band White Hinterland playing songs from "Phylactery Factory." If you want to hear more from Casey, check out the video of her performance at our blog, npr.org/bryantpark.