Accessibility links
Sharon Jones Stirs Up the Soul Thick Sharon Jones does not hold back. She ranges vocally from smooth, soulful funk to a brazen belt, and she can out-dance almost anyone, having been raised part gospel soul-stirrer, part James Brown disciple. Hear the queen of funk in a high-energy session recorded by KEXP.

'How Do I Let a Good Man Down' 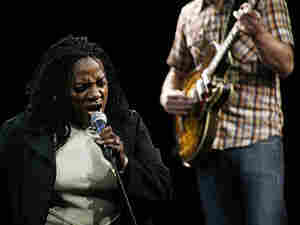 It's lunchtime on a white-sky afternoon in Seattle. A double-line of fleece-clad adults winds down the sidewalk and loops around the corner. The Triple Door, a swanky nightclub modeled after local turn-of-the-century burlesque theaters, is about to host one of KEXP's VIP Club concerts. Inside, I'm a bit nervous, as I'm about to introduce one of my heroes: Sharon Jones, a fireball of a performer whom I've seen play several times already.

This I know: Jones ranges vocally from smooth soul-funk to a brazen belt, and she can out-dance almost anyone, having been raised as part gospel soul-stirrer, part James Brown disciple. From the stage, she often pulls men from the audience to dance with her, while the rest of us watch, feeling like we've been pulled in, too. When Jones performs, we're all part of the show.

This time, before I step up to introduce the band, I hear Jones get up on stage before me and start talking to the audience. "Oh, no!" I think. How am I supposed to go out there now that she's introducing herself? But the stage manager gets up and informs her of the DJ who will announce her. I sheepishly walk forward as she exits, part of my mind saying, "This is what it feels like to be Sharon Jones." Behind me stands her backing band, The Dap-Kings, a perfect funk machine composed of a tight horn section powered by the rhythm of drums, bass, and congas, swirled over by a wah-wah guitarist who swings at just the right speed. I resist the impulse to start singing — even if it would be the best way to get fired and go out like fireworks.

But I breathe in and breathe out an intro: "And now, one of the top performing acts in the world: Sharon Jones and The Dap-Kings!" I walk offstage, and the band immediately finds its groove. Although it seemed to have already been at its peak, my anticipation continues to build, because I know that Jones is about to educate us all in the school of soul.

Listen to the previous Favorite Session or see our full archive.