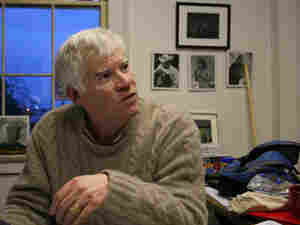 The Library of Congress has rescued New Orleans public radio station WWOZ's extensive live broadcast collection. The collection, which was almost lost in Hurricane Katrina, includes great recordings by many New Orleans musicians, including Deacon John, Beau Jocque, and the late James Booker. It's a rare historical testament to the city's roots music.

WWOZ's first location positioned the upstart station perfectly to broadcast some of New Orleans' greatest musicians. The studio was located in the beer-storage shed above the performance stage at the city's premier nightclub, Tipitinas. Local lore has it that someone punched a hole in the floor, and when a notable act showed up, the DJ would just lower a microphone down the opening.

In 1982, WWOZ founding manager Jerry Brock interviewed pianist James Booker — just one year before the local jazz legend died. One of the oldest recordings made by WWOZ, it was rescued by the New Orleans Jazz and Heritage Foundation.

O-Z, as it's affectionately called, soon moved from the beer closet to a three-room shack in Armstrong Park. Times were always tight for the all-volunteer operation, but it kept broadcasting and recording. Its collection grew, and despite efforts at preservation, thousands of hours of classic New Orleans music were stashed in an ordinary storage shed when Hurricane Katrina hit in 2005. Luckily, says WWOZ general manager David Freedman, the flood waters stopped right at the facility's loading dock.

"In a way, it was a blessing in disguise," Freedman says. "First of all, we didn't lose our tapes to the water. Second, we were forced into dealing with this wonderful problem that we created... which was we had this incredible priceless collection."

Freedman says that the recordings may have survived the flood, but the mold and cold were just as threatening. For help, he turned to the Grammy Foundation — and later to the Library of Congress, which three years earlier had named the collection to its national recording registry. The Library agreed to store the recordings, and Freedman starting shipping off crates.

It could take more than 10 years to catalog and digitize WWOZ's vast collection. But Gene Deana, head of the recorded-sound section at the Library of Congress, says he's thrilled to get it.

"The collection is remarkable. It is full of treasures. It's absolutely an all-star lineup of New Orleans jazz and blues performers. Right now, we are looking at about 3,000 hours, and I understand that there is more to come."

Although WWOZ's studio in Armstrong Park didn't survive Katrina, the station is currently broadcasting from a temporary set-up in the French Quarter. Informality still reigns at the station. Nothing stops a visitor from walking straight into the broadcast studio — which no longer has a hole in the floor.