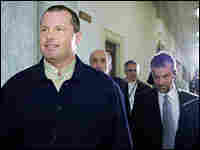 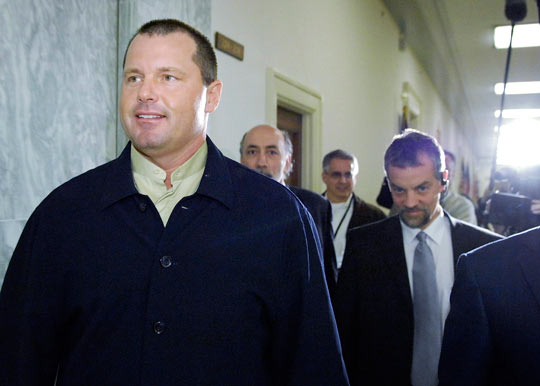 Former New York Yankees pitcher Roger Clemens (left) leaves a meeting on Capitol Hill, Feb. 7, 2008. Clemens was scheduled to testify Wednesday before a House oversight committee about the use of illegal drugs in baseball.

So comes now another gathering of congressmen to hear Mr. Roger Clemens and his former friends speak under oath and for the representatives to continue to generally examine baseball's drug problem. Oyez, oyez, batter up!

There are some, of course, who believe that this sort of thing is nonsense, that government should not bother umpiring sports, that that's a diversion from the more pressing business of the republic.

Myself, however, I incline my thinking in the other direction, that we need government to intrude occasionally, because sports is too popular, too important culturally to be left to the coaches and commissioners.

There are times, of course, when government can be as frivolous as the games it postures to protect. We had the example not long ago, for instance, of the Georgia House of Representatives actually voting passionately, 151-9, on a resolution to urge the NCAA to establish a college football playoff, all because the dear Georgia Bulldogs didn't make the title game this year. If ever there was a case of, hey, get over it ...

And since sports creates a wider audience than, say, an examination of import taxes on widgets, politicians are always vulnerable in these instances to grandstanding. Or ever worse, as was the case when Roger Clemens paid social calls on the Hill last week, congressmen will act like moonstruck adolescents before the big sports guy.

But that's a small price to pay for trying to keep sports on that level playing field it always brays about. A great many countries have a ministry of sports which oversees athletics, and in nations where soccer is uber alles — which is most of them — the country's soccer coach is often a national figure on the par with the prime minister.

While we don't care that much about international sport, our domestic leagues and our big-time college sports are so prominent in our public consciousness that, yes, especially when it comes to matters of cheating, the government has every good reason to investigate, no less than it would peer into possible improprieties in other institutions.

Yes, if professional players are taking illegal drugs and affecting the outcomes of games and influencing the behavior of young athletes, then elected officials are right to step in. And yes, like Sen. Arlen Specter, I do very much want to know why the NFL commissioner destroyed those illegal videos taken by the Patriots, the most successful franchise of this century. And yes, Congress was correct in looking into the way that old NFL players may be treated in a business otherwise so prosperous and glorious.

Of course, I do find it inconsistent that Congress almost never seems to stick its nose into college sports, even though they are autocratically ruled by the NCAA, an organization that sports economy authority Andrew Zimbalist so perfectly labels as nothing more than "a trade organization for coaches, athletic directors and conference commissioners."

There is more hypocrisy and cheating in college sports than the pros would ever dream of. But, of course, like the ladies and gentlemen of the Georgia House of Representatives, our federal politicians all love their alma maters and play up to the alumni who vote, so they keep their attention focused on the pros.

And so now we welcome Mr. Clemens to take the oath and explain himself.