Accessibility links
'Definitely, Maybe' On the verge of divorce, Will Hayes tells his 11-year-old daughter the story of how he met his wife, her mother. His daughter Maya is hungry for details, and Hayes reveals them — mystery-style. 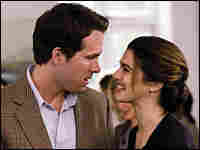 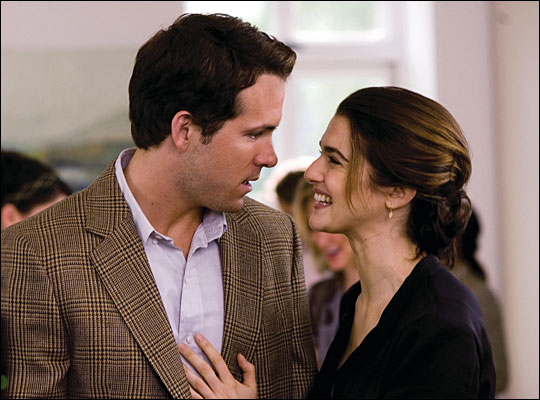 Will Hayes (Ryan Reynolds), flirts with journalist Summer (Rachel Weisz), a central character in the romantic memories Hayes imparts to his daughter.

A bedtime-story request leads soon-to-be-divorced Will Hayes (Ryan Reynolds) to tell 11-year-old Maya (Abigail Breslin) how he met her mom. He frames the tale as a mystery: Maya has to guess which of the three serious romances he had while working on Bill Clinton's '92 election campaign ended in matrimony and a daughter.

With three attractive possibilities — a college sweetheart (Elizabeth Banks), a campaign co-worker (Isla Fisher) and an aspiring writer (Rachel Weisz) — the story keeps the audience guessing as well. Reynolds' perpetually-dumped Will is an appealing if unorthodox romantic lead, but his romantic misadventures turn repetitive as he shuttles from one dumper to the next — and as an overly contrived script requires him to make tactical mistakes more intriguing to an 11-year-old than to adult moviegoers.

Dialogue that doesn't quite zing, music that's increasingly overbearing and pacing that sags after the first hour all lend the film a second-hand air. Sweet, but definitely less-than-stellar, maybe because it feels so calculated.