Accessibility links
'The Spiderwick Chronicles' When siblings Jared, Simon and Mallory move into a mysterious old house, they find they're not alone. Convincing digital goblins chase the siblings through an adventure that conforms to genre but should appeal to kids. 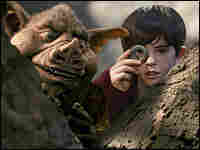 The friendly hobgoblin Hogsqueal (voice of Seth Rogen) helps Jared (Freddie Highmore) use a "seeing stone" to spy on a gathering of otherwise-invisible goblins in The Spiderwick Chronicles. Paramount Pictures hide caption

In this first installment of what will doubtless become a kids' fantasy franchise, a divorced mom (Mary-Louise Parker) moves with her three kids into the family's abandoned country manse, only to discover that it's sprite-infested. Great-great-uncle Arthur (David Strathairn) had been writing a faerie-world guidebook, y'see — Arthur Spiderwick's Field Guide to the Fantastical World Around You — when he disappeared some six decades earlier, and a neighboring colony of faerie-loathing ogres would love to get their gooey hands on the secrets in it.

Happily, Arthur's now-elderly daughter Lucinda (Joan Plowright) left a pantry well-stocked with honey, tomato sauce and oatmeal before being carted off to the loony bin at the age of 9. And once the kids discover what each of those foodstuffs is good for — placating certain creatures, dissolving others — they prove resourceful in the art of goblin-repelling.

Sarah Bolger (as teenaged Mallory) and Freddie Highmore (doubling as both of her brothers, defiant Jared and gentle Simon) fight the digital baddies persuasively enough that you're not thinking about how they're probably surrounded by green screens. And though director Mark Waters allows the ending to get overwhelmed a bit by special effects, all he's really doing is hewing to genre requirements.