Accessibility links
Palestinian PM Tackles Corruption, Hamas Salaam Fayyad, the Palestinian prime minister, is lobbying Congress and the Bush administration for financial and political support. He discusses the stalled peace talks with Israel, anti-corruption efforts and the thorny issue of Hamas in Gaza. 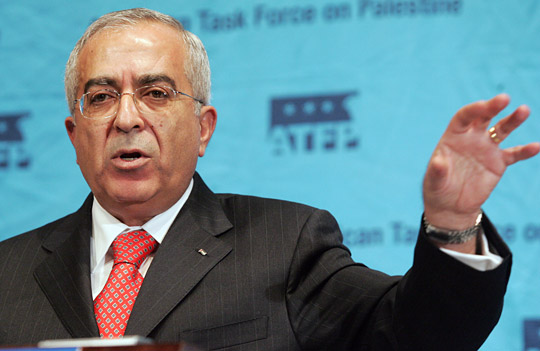 Palestinian Prime Minister Salaam Fayyad is in Washington, D.C., this week, lobbying Congress and the Bush administration for the financial and political support his government needs to remain viable in the West Bank, regain its foothold in Gaza, and jumpstart stalled peace talks with Israel.

Fayyad, a University of Texas-trained economist who worked for several years at the World Bank, actually runs the government of President Mahmoud Abbas on the West Bank. In Gaza, the Islamist group Hamas took over by force.

In part, Hamas was able to consolidate its strength by opposing corruption in the old Fatah government.

Fayyad tells Robert Siegel that the current regime's first order of business is to stop corruption from occurring now by "ensuring that you immunize the system and shield it from such occurrences going forward."

He says that beginning next month, the government plans to make detailed monthly reports about public revenue and expenditures public on the Ministry of Finance's Web site.

"The important thing about this is not willingness to be open, but ability to be open. We have really put the system back on track," Fayyad says.

He says those guilty of corruption in the past have not been forgotten — and they will be brought to justice.

"There is no statute of limitations on corruption, and people who committed crimes like this should at all times feel that they are going to be pursued, because they will be," the prime minister says.

Fayyad also says that the Fatah government should be in charge of the Palestinian side of the Gaza border crossing — despite the fact that Hamas drove Fatah out of the area.

"All that is required is for [Hamas] to step aside and get out of the way and allow this to happen," Fayyad says.

But he acknowledges that Hamas has given no indication it is willing to "step aside."

"Based on the indications I get so far, it doesn't look that way, but this is no reason whatsoever to stop trying, and to really push this forward is the only way to make this happen," he says.