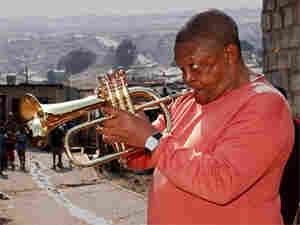 Hugh Masekela devoted the prime of his life to the struggle of his lifetime — ending apartheid in South Africa. Short in stature but great in presence, Masekela has that spark that continues to engage us. At the Tanglewood Jazz Festival, Masekela dedicates his music to the people of war-torn Darfur.

Born in 1939 in Witbank near Johannesburg, Masekela grew up when "every house had a gramophone," as he says. From the time he was 3, he thought the musicians lived inside that record player, and he wanted to meet them, especially Louis Armstrong.

In 1948, South Africa adopted apartheid laws, which forced segregation by race. They remained in place for more than 40 years.

Masekela became a working musician, but chafed against the oppressive laws and brutal enforcement. He had seen the movie Young Man with a Horn with Kirk Douglas, and African-American jazz was a beacon of freedom to him. In the early 1960s, he left South Africa, first going to London, then coming to the U.S. Harry Belafonte, whose calypso records had launched his career, sponsored Masekela's studies at Manhattan School of Music, where he played trumpet in the symphony and sang in the opera choir.

Masekela remembers Miles Davis encouraging him to "do your own thing," and in 1968, Masekela fused African music, jazz, and pop into the #1 hit "Grazin' in the Grass."

Toward the end of this show, Masekela tells the audience how anti-apartheid fighters — imprisoned for several decades — led the new democracy. "Their spirit wasn't broken," he says, "and they said to us, 'Don't do like other countries do sometimes, when they get their freedom and start to burn down their own country. Instead, let's try to build our country together.'" Masekela's anthem from the late 1980s, "Bring Back Nelson Mandela," becomes a Tanglewood sing-along late into the night.