Accessibility links
A Better Lifestyle for a Longer Life New research suggests that physical activity and other healthy choices can go a long way in extending lifespan. Many of the very old have decent odds of reaching their 100th birthday, even if they are living with chronic illness.

Listen
A Better Lifestyle for a Longer Life 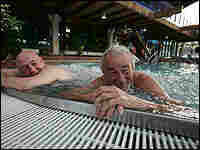 Though average human life expectancy hovers around 78, the number of very old people — those thriving at 85 and beyond — is multiplying.

Today, there are more than 55,000 American centenarians, and the over-85 group is the fastest-growing population in the United States.

But long lifespans aren't solely reserved for those in tip-top health, says one new study.

The study, published in the Archives of Internal Medicine, indicates that many of the very old have decent odds of reaching their 100th birthday, even if they're coping with heart disease or diabetes. It included 700 centenarians, about one-third of whom had been living with a chronic disease for years.

"A lot of people think that if you have major age-related diseases for 15 or 20 years, that you're not going to make it to very old age," says Dr. Dellara Terry at Boston University, the study's lead author. "And, in fact, these are folks who not only made it — but they made it to age 100!"

The study may give Peggy Dunbar, 87, of Washington, D.C., a lift. Despite high blood pressure and a respiratory condition, she tries to get up and out every day.

So, before society engineered exercise out of daily life, Dunbar's habits were already set. These days, she tries to fit in two or three exercise classes a week.

According to a second study in the Archives of Internal Medicine, this kind of active lifestyle is a key predictor of longevity.

Researchers at Harvard University's Brigham and Women's Hospital followed a group of 2,357 men for about 25 years beginning in their early 70s. They found that the men who lived the longest had some things in common: They avoided smoking, didn't become obese or diabetic, controlled their blood pressure, and remained physically active, exercising two to four times per week. These men had greater than a 54 percent chance of living into their 90s, researchers said.

"The surprise, I think, is the importance of regular exercise, and how strongly that was associated with long life and good function," says Dr. Laurel Yates, the lead author of the study.

This means folks aren't just hanging on. Many have a good quality of life.

"There's so much ageism in this society that constantly reminds older people, 'You can't do this; you can't do that,'" says geriatrician William Hall at the University of Rochester.

But, Hall says, there are a lot of ways for older Americans to stay active. He says that many older adults, particularly women, do well with group activities. Men tend to be motivated by a little friendly competition. Either way, it takes effort.

"I'm not by any means a Pollyanna about this," Hall says. "Aging isn't for sissies."

It comes with losses, including, friends, spouses, sometimes children. But those left behind, Hall says, have to keep active and try to create new friendships.