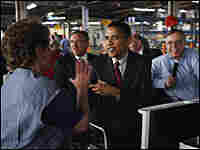 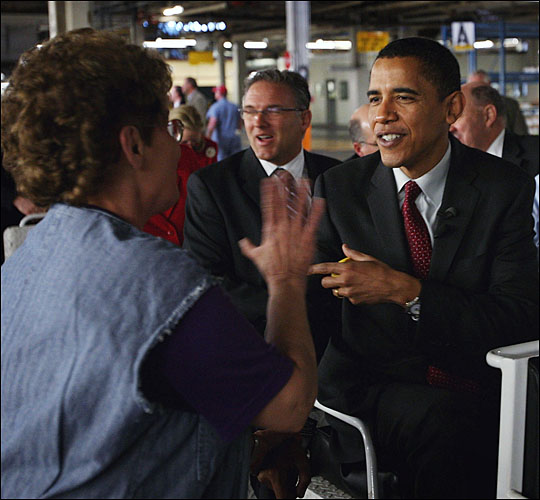 Sen. Barack Obama greets employees during a tour of the General Motors assembly plant in Janesville. Wis., on Wednesday. Obama outlined his plan for economic policy following the tour.

Democratic presidential hopeful Barack Obama used the backdrop of a General Motors plant in Janesville, Wis., to summarize his economic proposals on Wednesday. Wisconsin voters go to the polls on Tuesday.

For almost 100 years, Obama said, the GM plant in Janesville has produced not just profits for GM, but also prosperity for the wider community.

"The promise of Janesville has been the promise of America," Obama said. "Our prosperity can and must be the tide that lifts every boat."

Obama argued that shared prosperity has been jeopardized by corporate tax cuts, misguided trade deals and a failure of leadership in Washington.

"We have greater income disparity in this country than we've seen since the first year of the Great Depression," he said.

Speaking to a group of blue-collar workers, Obama consciously veered from his inspirational stump speech and tried to anchor lofty ideals to very specific policy proposals. Those include tax cuts of $500 per person, a plan to promote more affordable health care and a proposal to automatically enroll workers in retirement savings plans.

Obama also called for investing $60 billion over the next 10 years to fix bridges, highways and other infrastructure. He said the plan would generate up to 2 million new jobs, directly and indirectly. He planned to pay for the additional investment with money that's now being used to fund the war in Iraq.

"It's time to stop spending billions of dollars a week trying to put Iraq back together and start spending the money on putting America back together instead," Obama said.

Obama criticized his Democratic rival Hillary Clinton and likely Republican nominee John McCain in the same breath for voting in favor of the war.

Clinton's campaign fired back, saying both Obama's infrastructure proposal and a separate plan to encourage alternative energy jobs were ideas Clinton had raised months ago.

"I have solutions," Clinton said during a news conference. "The question today is does Sen. Obama."

What's at Stake in the Wisconsin Primary? 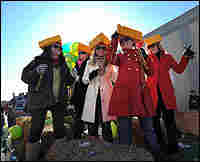 • The Wisconsin primary is open, meaning registered voters can participate in either party's contests. Voters can register the day of the primary.

The next few weeks are crucial for both Democrats and Republicans, as the presidential candidates try to earn enough delegates to secure their parties' nominations.

On the Democratic side, New York Sen. Hillary Clinton could use a win between now and key March 4 contests in Texas and Ohio. The Wisconsin primary on Feb. 19 offers Clinton the chance to disrupt Illinois Sen. Barack Obama's winning streak. Since Super Tuesday, Obama has won eight contests in a row — most recently, in Maryland, Virginia and the District of Columbia.

For the Republicans, Wisconsin will offer Arizona Sen. John McCain the chance to pick up more delegates. The state's demographic make-up — overwhelmingly white, with a large number of Democratic, independent and progressive voters — favors McCain: These groups have been the bedrock of much of his support during the primaries.

Look for campaign stops and television ads in Wisconsin in the coming days. Both Obama and Clinton (through her daughter, Chelsea) have already begun campaigning in the state.

What's at Stake: Clinton and Obama are battling for the 74 delegates at stake in Wisconsin — and for the momentum that victory there would bring them going into the March 4 nominating contests in Texas, Ohio, Rhode Island and Vermont.

Wisconsin's demographics would seem to favor Clinton, since she has done well with white, working-class voters in many primaries this year (Wisconsin's population is 87.5 percent white).

But the state boasts a history of progressive politics that could benefit Obama. The 1960 primary, for instance, was crucial in helping John F. Kennedy win the Democratic nomination over rival and fellow senator Hubert Humphrey.

In 2004, Howard Dean's failure to win the Wisconsin primary essentially ended the former Vermont governor's presidential campaign. Massachusetts Sen. John Kerry carried the state that year and went on to win the nomination.

If Republican voters decide that their party's nomination is already locked up, they — and independent voters — could decide to participate in the Democratic contest; Wisconsin allows voters to participate in either party's primaries.

What's at Stake: McCain has far more delegates than his rivals and is still perceived as the party's front-runner, but Huckabee has managed to continue winning — most recently, in Louisiana and Kansas. On Super Tuesday, he did especially well in the South, winning Alabama, Georgia, Tennessee, West Virginia and Arkansas.

While Wisconsin does have a segment of evangelical voters — a group that overwhelmingly helped Huckabee win the Iowa caucuses — they have not been very active in the state's past primaries.