Accessibility links
One Beagle's Win a Loss for Others Beagle lovers are celebrating the triumph of one of their own this week at the Westminster Dog Show. A beagle named, Uno, made history as the first beagle to win the "Best in Show" crown. The result could be a surge of beagles in animal rescue shelters.

Listen
One Beagle's Win a Loss for Others

Beagle lovers are celebrating the triumph of one of their own this week at the Westminster Dog Show. A beagle named, Uno, made history as the first beagle to win the "Best in Show" crown. The result could be a surge of beagles in animal rescue shelters. 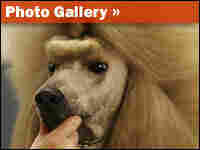 If you've ever loved Snoopy, cried over Shiloh, or cheered for the underdog, this moment is for you.

Unidentified Announcer: Thank you very much. May I have the beagle?

MONTAGNE: Beagle lovers coast-to-coast have only begun to celebrate their Tuesday night triumph at the Westminster Dog Show. You might remember we reported yesterday that the affable Uno made history as the first beagle to runaway with the Best in Show crown.

In fact, beagles are notorious for running away, one of several traits that might not make them ideal for everyone. Still, as NPR senior correspondent Ketzel Levine tells us, a win at Westminster could result in an epidemic of beagles.

KETZEL LEVINE: Now, that's a scary thought, and I speak from experience. I have loved and lived with many a beagle, still do, which is why I wasn't surprised when Tom Colvin told me he was ambivalent when he found out who won Westminster.

LEVINE: Yes, I'm afraid this story is more a cautionary tale than a celebration of a very amusing breed. Kid-friend, soft to the touch, with a penchant for going deaf in the presence of a good smell, beagles are also vocal - and while some of us consider their baying sweet and melodic, a howling dog can drive many to distraction.

Mr. COLVIN: I've seen beagles brought in because of the sounds that they make -the baying that they make. And people have actually even had their vocal cords stripped or cut. And I'm just abhorred to see that when that comes to the Animal Rescue League.

LEVINE: The reasons most dogs end up in rescue is because their owners can't make the relationship work. That's why there's so much information and support available to help people choose the right dog: online match making, home visits from rescues, lifestyle questionnaires from breeders. All these are to minimize the risk that you end up giving up your dog.

Mr. HAL HERZOG (Social scientist): If it was good enough for Westminster, then it has to be the perfect dog. My name is Hal Herzog. I'm a professor of psychology at Western Carolina University. Humans are inveterate copycats.

Mr. HERZOG: So what you see is all of a sudden a dog bred will get really hot and it'll just take off through a culture. Everybody wants one. You start seeing them all over the place. And then sometimes they just don't work out. they can be hard to live with, which means that then the dogs may start showing up at, you know, at the dog pound, the animal shelters and wind up euthanized.

LEVINE: The moral of this cautionary tale: dogs are not As Seen on TV. Reality will set in and an unwanted dog is everyone's problem. Besides, living with the wrong animal is hell for both of you. And so while it's said you can't choose your family, you can choose your dog and it just might be a beagle.

(Soundbite of music) MONTAGNE: And the conversation on fauna and flora continues at Ketzel's blog, npr.org/talkingplants.