Accessibility links
The Science of the Perfect Souffle Transforming runny egg whites into the fluffy edifice of a souffle is all about physics and chemistry. Enter the kitchen of chef Jeffrey Buben, who has egg cooking down to a science.

Listen
The Science of the Perfect Souffle 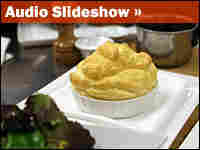 Watch as chef Jeffrey Buben shows you how to make a perfect souffle. 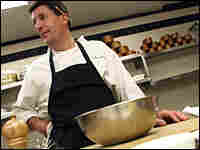 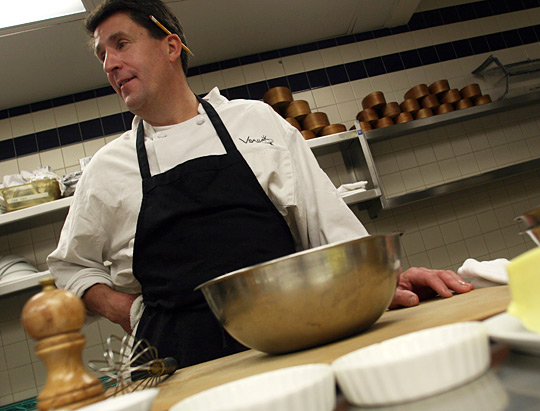 Owner and chef Jeffrey Buben gives a cooking lesson in making a perfect souffle at his Washington, D.C. restaurant Vidalia. 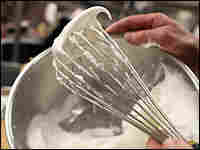 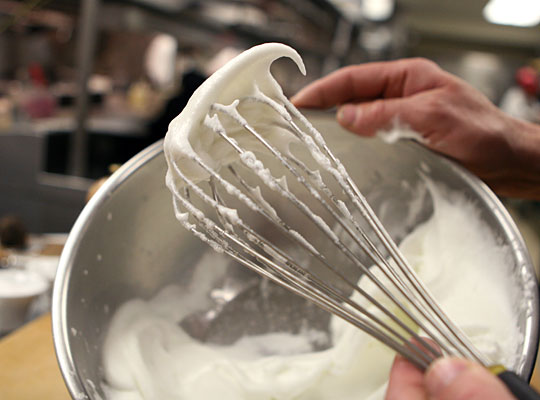 Egg whites reach perfection just as they lose their sheen.

Get the recipe for Jeffrey Buben's omelette souffle with red wine butter sauce.

Science in the kitchen is largely the chemistry kind — the properties of two liquids mixing, the transformation of bread into toast, the breakdown of starches into sugars. But do you ever think about velocity or gravity in your cooking? It turns out, beating eggs is all about science — and it's physics and chemistry that make a souffle rise or fall.

Though I've beaten plenty of eggs in my day, for an expert opinion on the subject I turned to Jeffrey Buben, owner and head chef at Vidalia, a restaurant in Washington, D.C.

The first step in making an egg dish like meringue or a souffle, Buben says, is to separate the yolks from the whites, the fat from the protein.

Fat and protein — remember that. The yolk has fat and some protein, but the white is all protein, no fat.

"When I was growing up in the kitchen," Buben says, "the chefs would say 'no goldfish.' And what they meant was... sometimes when you separate eggs you get a little nip of the egg yolk in the whites and that would fall into the bowl. And if you brought the chef a bowl of egg whites that had goldfish in it... he would pretty much throw you out of the kitchen and tell you to start all over again."

So why is it so important to make sure there aren't any goldfish in the egg whites? Because remember, yolks have fat in them.

When you beat egg whites, you're basically mixing air into them. The protein in the egg whites forms a kind of skin around the bubbles of air. But if there's any fat present, the skin can't form and the air leaks away. Even a trace of fat is ruinous. So, no goldfish if you want a souffle.

Just the Right Amount of Air

There are some tricks to getting just the right amount of air into your egg whites.

Use a very clean bowl, Buben says, and keep a "nice, even flow of beating to incorporate the air. And you don't want to over-beat them and have too thick a mixture that it won't fold into your souffle or your batter or your sponge."

With that, Buben's ready to start cooking. He's wearing a spotless white chef's jacket, checked pants, and those clogs that all chefs seem to favor. He has a large, clean, stainless-steel bowl — some say copper bowls work better, but he's not convinced. He also has a large whisk and a carton of fresh eggs.

He picks one up, holds it over his work table, and tells me something surprising.

"You always want to crack an egg on a flat surface," Buben says. "What that does is it gives you less shell shatter, so that when you go to add it to a recipe, you won't get little shards of shell in your recipe. So it comes with a much cleaner crack, one crack on a flat surface."

So not on an edge?

Buben cracks open an egg and lets the white spill into one bowl. Then he plops the yolk into a different bowl. He repeats this with two more eggs.

You can tell he's practiced at this. For those not as expert as Buben in separating eggs, you might want to put each egg's white into a small bowl, inspect it for goldfish, and only then add it to your mixing bowl.

Buben picks up his whisk and starts to work on the egg whites.

"Now what I like to do," he says, "is start in circle eights, just to break up the egg whites. Then you want to go in a circular motion. Turn your bowl at about a 15 degree angle, and just keep whipping it, and try to get as much air in as quickly as possible.

The Architecture of a Souffle

About four minutes later at a steady 180 beats per minute, our egg whites have transformed.

"What we're looking for now is nice beautiful peaks," Buben explains. "Some chefs that I learned from say the point where you have the meringue perfect is when you just lose the shine from the egg whites... And we're getting very, very close to that point."

He finishes beating, and the whites are as light as air. But their architecture is fragile, Buben says, "so you have to move very quickly with it, and be very gentle."

Move quickly because the air can still leak out of the tiny protein pockets, and move gently because the protein skins are thin and will collapse easily.

He uses his whisk to mix the egg yolks and then uses a rubber spatula to gently add the stiff egg-white mixture to the yolks. He folds the two just until the whites are incorporated, then places the whole thing into a baking dish.

When the egg mixture is baked in a 350-degree oven, those air bubbles trapped in the egg whites expand, making the souffle rise. The heat also causes the protein to stiffen a bit, and along with the fat from the yolk, it forms a kind of scaffold that keeps the souffle from collapsing.

After six minutes, Buben checks on his omelet souffle. "Oh, isn't that beautiful," he says, pulling it from the oven.

The egg mixture has nearly doubled in volume.

Now I'd probably eat it as is, but Buben has bigger ideas. While the souffle was in the oven, he made a reduction of wine and shallots and stirred in some butter. Now he spoons that mixture over the souffle, topping it off with a few shavings of black truffle.

A couple of glasses of red wine appear.

And you wonder why I love my job. 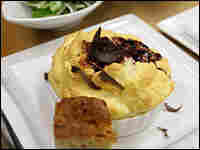 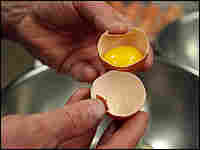 Buben's advice: separate your yolks from whites carefully and fish out any yolk that gets into the whites, or chef beware. Coburn Dukehart, NPR hide caption 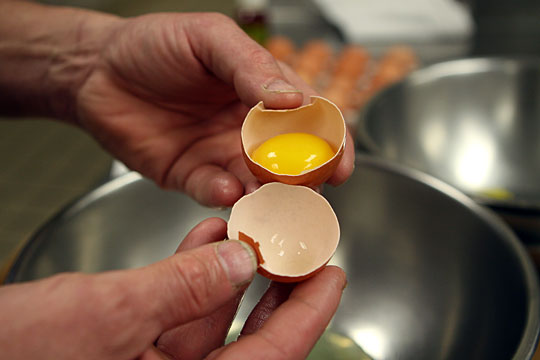 Buben's advice: separate your yolks from whites carefully and fish out any yolk that gets into the whites, or chef beware.

Brush the inside of a medium sized soufflé baking dish with softened butter and lightly dust with flour.

Separate the eggs. Whisk the whites until stiff.

Whisk the yolks until creamy and add seasonings.

Fold in eggs whites to yolk mixture and transfer to the prepared baking dish.

Bake at 375 degrees for six minutes until golden.

You can add minced fresh herbs such as chives, chervil, parsley or tarragon to the yolk mixture. You can also add gruyere cheese finely grated or your cheese of choice. A red wine butter sauce (see recipe below) with shaved fresh truffles is the ultimate option!

Remove from heat and whisk in the soft butter a little at a time until a rich and smooth texture is achieved.

Spoon into the center of the omelette souffle and serve immediately.

Jeffrey Buben is owner and head chef of Vidalia restaurant in Washington, D.C.