Accessibility links
Canciones de Amor: Boleros for Your Lover Boleros are a form of love song that originated in Cuba in the 19th century, and the lyrics reflect themes of bittersweet, unrequited, betrayed, or eternal love. Not all of these songs are strictly boleros, but they all maintain the tradition — and, more importantly, the feeling. 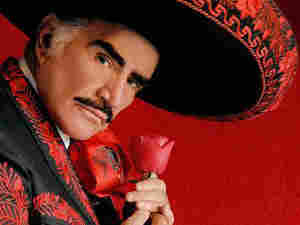 The bolero is a form of love song that originated in Cuba in the 19th century. It came into its own after mostly Mexican composers, working in the 1940s, wrote songs that became popular throughout the Spanish-speaking world. The lyrics often reflect themes of bittersweet, unrequited, betrayed, or eternal love.

Here are some of my favorites. Some are not strictly boleros, but all of these songs maintain the tradition — and, more importantly, the feeling.

I'd bet the rent that those of you who know this song just sang that chorus to yourselves. A song of loss that's been covered most famously by the great Mexican mariachi Vicente Fernandez and the great Chicano rock 'n' roll band, Los Lobos. Sing it in the shower, full voice. You'll feel Latin.

In the Wee Small Hours of the Morning

In the Wee Small Hours...

It seems like a huge stylistic jump, but not really. This song has all the characteristics of the classic bolero: the poetic, bittersweet lyrics; slow, almost imperceptible rhythm (boleros are meant to be slow-danced) and that voice. Sinatra's ballads were always popular in Latin America. "When your lonely heart has learned its lesson, you'd be hers if only she would call."

Carlos Santana's father was a mariachi, and his grandfather was a mariachi. That musical lineage shows in this instrumental from the band's second album, 1970's Abraxas. Santana said he wrote it after his first trip to New York City, where he saw so many people living on the street, their spirits broken. It's still in their song line-up, and can still make old-school Chicanos get up to slow-dance with their wives.

Had Billy Strayhorn been born in Mexico, we'd be singing this song in Spanish. Written while he was just a teenager, it has become not just a jazz classic, but also one of the most popular tunes of the great American songbook. This performance of "Lush Life" is definitive.

To this day, I get a little nervous if I'm standing near a river at night. La Llorona, or the weeping woman, supposedly roams rivers and streams, weeping for her drowned children. How is this romantic? Well, a mother's love is eternal, isn't it? The myth spawned a bolero, and one of my favorites is from the film Frida, as performed by the Mexican vocalist Chavela Vargas. While not exactly romantic, it certainly captures the desperate, tequila-fueled cantina environment of the bolero.