Accessibility links
Baseball Memories: The Red Barber Centennial Walter Lanier Barber, better known as "Red" to countless baseball fans who heard his memorable broadcasts over the decades, was born 100 years ago this Sunday. Before his death in 1992, Barber spent a dozen years as a Morning Edition commentator. 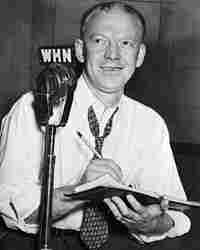 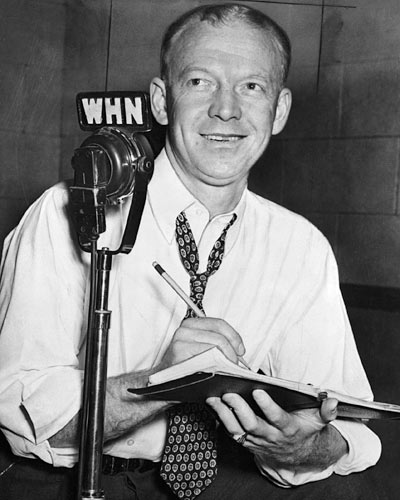 In Game Six of the 1947 World Series, the Brooklyn Dodgers are leading the New York Yankees, 8-5, when Joe DiMaggio comes up to bat.

From 1981 to 1992, Red Barber joined Morning Edition host Bob Edwards in a weekly conversation about sports in particular, and life in general. Hear selected segments:

The late Walter Lanier Barber, better known as "Red" to countless baseball fans who heard his memorable broadcasts over the decades, was born 100 years ago this Sunday.

From the 1930s through the '60s, the pioneering sportscaster did play-by-play successively for the Reds, the Dodgers and the Yankees. In 1978, Barber and Mel Allen became the first broadcasters honored by baseball's Hall of Fame.

In 1981, Barber came out of retirement and began a second broadcasting career, this one on NPR's Morning Edition. For a dozen years, host Bob Edwards chatted with Barber about more than just sports. Their weekly conversations often began with Barber reporting on goings-on near his Florida home:

"In this troubled world of ours, I'm happy to report to you that the camellias are beginning to show their blossoms here in Tallahassee..."

"By the way, Bob, something serious in sporting is going on down here in my front yard. There's a mockingbird that's got a nest, and he's got some young ones in there. And you know about our Abyssinian cat, Arwe ... his life is now miserable. He likes to go out, but he doesn't anymore. He's just hanging inside because I want to tell you that the father mockingbird is a rough customer. He is dive-bombing our cat."

Ketzel Levine has a remembrance of the legendary sportscaster, who died in 1992.

Red Barber and his "Barberisms" were immortalized in a James Thurber short story, "The Catbird Seat," published in the New Yorker in 1942 and excerpted below:

In the halls, in the elevator, even in his own office, into which she romped now and then like a circus horse, she was constantly shouting these silly questions at him. "Are you lifting the oxcart out of the ditch? Are you tearing up the pea patch? Are you hollering down the rain barrel? Are you scraping around the bottom of the pickle barrel? Are you sitting in the catbird seat?"

It was Joey Hart, one of Mr. Martin's two assistants, who had explained what the gibberish meant. "She must be a Dodger fan," he had said. "Red Barber announces the Dodger games over the radio and he uses those expressions — picked 'em up down South." Joey had gone on to explain one or two. "Tearing up the pea patch" meant going on a rampage; "sitting in the catbird seat" means sitting pretty, like a batter with three balls and no strikes on him.